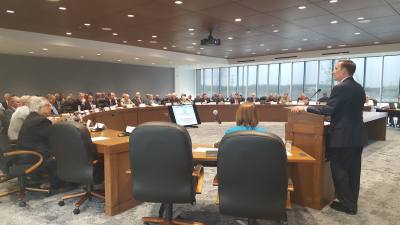 Representatives from the North Texas Municipal Water District’s 13 member cities met March 30 at the district’s Wylie office to discuss how to explore possible amendments to their water contract with the district. The contract was last amended in 1988 and determines each city’s proportionate share of the regional system costs. It also includes rates set by the district based on each city’s historical peak usage.

NTMWD Executive Director Tom Kula said he knew of at least five member cities that could exceed their rate level usage this year. Plano has paid a set rate for 26.7 billion gallons of water annually since 2001 when severe drought led to a usage peak and has not reached that mark since.

The study group, which is the first of its kind in the district’s 65-year history, will consist of city-appointed representatives, members of the water district and a team of water rate and management experts appointed by the district and/or the member cities. The group will hold monthly meetings to determine how the member city contract could better reflect current regional factors, such as population growth and the cost of maintaining aging infrastructure, as well as extended periods of drought.

Kula said the North Texas region is currently faced with all three challenges, including the rising cost of water, which is occurring across the country.

Chris Ekrut of NewGen Strategies and Solutions said he and other experts with the consulting firm would participate in the study to provide data and guidance while exploring the existing contract. The firm helped with the 2007 study of the contract.

“We bring a number of aspects to this process that we feel would be beneficial [to member cities] as they continue to go through this study,” he said. “We’ve experienced changing conditions. We’ve been through a record drought. Because of these conditions, we feel that now is the best time to go through this and we think now is the best time to achieve success. But success can only be achieved if we look long-term.”

Harris said the the North Texas region has benefitted from being a part of the district over the years and hoped it and its member cities could find a way to revise the contract to take conservation into account. Plano officials expressed concern last year about the cost tied to the contract. In recent years, most cities have not reached their maximum usage in periods of ample rain or during periods of drought.

“We really see it as a responsibility issue,” Harris said. “Conservation is the right thing to do. [We want] to figure out a way to incorporate conservation into the contract mutually as opposed to being exclusive as they are now. [This is] the way to sustaining our future together.”

McKinney interim City Manager Tom Muehlenbeck said while the member cities support the capital needs of the district, the district should also understand the capital needs of the member cities. The city of Plano, for instance, is expected to issue approximately $36 million in revenue bonds this year for its water and drainage system projects. The city has not had to finance these infrastructure projects since 1993, according to city staff.

“[The NTMWD’s rate increases] are impacting our local budgets for water and sewer,”Muehlenbeck said. “We have capital needs that are going unmet because we cannot afford to raise the rates to compensate not only for the purchase of water, whether we use it or not, but also needed capital improvements to the tune of $30 [million] to $35 million a year that we need. We just can’t afford both of them [and] we cannot impact our ratepayers to that extent.”

Allen City Manager Peter Vargas said his city was willing to work together to come up with a plan that could balance the needs of the region financially while continuing to push for water conservation.

“[The Allen City Council] very much wants to … be a team member as we go through this,” he said. “[However], we want to be able to move forward with conservation, not backward. We feel the current structure is anti-conservation.“

Farmersville Mayor Joe Helmberger said although his city council had not discussed it formally, he had no problem going forward with the study. However, he is concerned how changes to the contract could affect Farmersville in the long run. While he said the cities owe it to residents to conduct the study, district rate increases have impacted Farmersville’s ability to expand its existing wastewater treatment services. Helmberger said the city would not support any rate increases as a result of the study.

“I don’t think the city of Farmersville will support anything that will cost its citizens another dime,” he said. “We’ve had very little growth on our side of the lake up to this point. Our [water and sewer] rates are some of the highest in the county. We don’t have a general fund to keep our citizens from paying that additional money."

"We hope that it will only take a few meetings for the working group to develop alternatives to present back to the primary group of city leaders for consideration," said Janet Rummel, NTMWD public relations manager. "However, the cities are really the ones who will drive this process."
SHARE THIS STORY