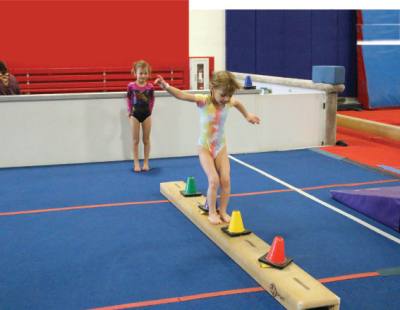 Long time friends Ginger Fox and Carol Van Biezen were gymnasts who competed on a national and international level when they lived in Canada. Years after they retired from their gymnastics careers, the pair moved to Frisco and opened Eagle Gymnastics Academy.

“We wanted to open a gym that was a lot like the one we went to in Canada—a gym that was family-oriented and a positive atmosphere for kids,” Van Biezen said. “That’s how Ginger and I trained, and that’s how we’ve coached.”

Eagle Gymnastics Academy opened in 2004 in a facility near Technology Drive with 60 students recruited by Fox and Van Biezen.

But the academy soon outgrew the space. Fox and Van Biezen opened a new facility in 2010.

“At the time Frisco was just starting to grow, and with so many kids, we thought it was great to put something that would be great for the city, and we’ve come so far,” Van Biezen said.

The gym currently serves more than 1,200 gymnasts, some of whom compete nationally and internationally. The programs are open to children as young as age 1 and adults up to age 23.

“We’re also one of the only clubs in the country to have kids on national teams or at the elite level in all disciplines,” Fox said.

Last year, two athletes were on the national team once again and competed in the world championship held in Russia.

Fox and Van Biezen said it has been great to see how far their staff has come and see their athletes grow up with them in the years they have been in operation.

“Our philosophy is having a good family atmosphere and teaching important life skills to these kids because we know that their gymnastics career is not going to be extensive, so we want to build these kids into good people,” Fox said.

The spraying will occur to the west and south of Northwest Community Park.

Romeo's Pizza brought its cuisine to the Lone Star State this month. The chain's first Texas location is in Frisco.

Perry's Steakhouse in Frisco is brightening up their dining experience just in time for summer.

Purefoy has overseen execution of laws and the day-to-day administrative affairs for 34 years.

The brewery will have indoor seating and a large, outside patio and beer garden behind the building.

The restaurant serves African fusion meals and a full bar with music and an entertaining atmosphere.

The facility offers a variety of healthcare services for men.