Football game between Plano, El Paso high schools will now be held at The Star in Frisco 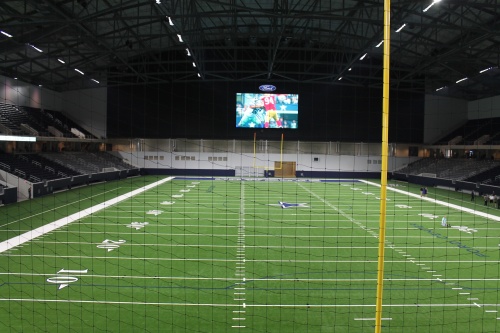 A game between Plano Senior High School and El Paso's Eastwood has been moved to the Ford Center at The Star in Frisco after Plano ISD officials expressed concerns over safety in the wake of a mass shooting at an El Paso Walmart.

Updated at 8:05 p.m. Aug. 16: This story has been updated to include comments from Frisco ISD.

A football game between Plano Senior High School and El Paso's Eastwood High is back on, one day after Plano ISD officials canceled the event because of concerns over security at the district’s stadium in Murphy.

Plano ISD Superintendent Sara Bonser said Aug. 16 that the game has been rescheduled for Sept. 5 at the Ford Center at The Star in Frisco. The district had initially said it was canceling the game over security concerns in the wake of the Aug. 3 mass shooting at an El Paso Walmart that left 22 dead.

The new venue will offer more security than a typical outdoor stadium, Bonser said. It became available when Frisco ISD Superintendent Mike Waldrip reached out to offer use of the facility. Frisco ISD, which helped pay for the indoor stadium where the Dallas Cowboys also train, uses the stadium for high school football games. The stadium is owned by the city of Frisco but operated by the Cowboys staff.

“Mike changed his football schedule in order to accommodate our two districts, knowing that this facility provides a level of security that we feel this unique situation warrants,” Bonser said.

The Plano district called a news conference late Friday to announce the game was back on but had few details to share about what security concerns informed its original decision to cancel.

“I wouldn’t say that there were specific concerns, and that’s not what we’re here to address today,” district spokesperson Lesley Range-Stanton said. “It’s just the level of ‘what could happen’ in this very unique microcosm of a situation.”

Eastwood High School football coach and athletic director Julio Lopez said at a separate news conference in El Paso on Aug. 16 that he was disappointed when the game was initially canceled. He said believed that the game could be a catalyst for healing for the El Paso community.

“This was more than a football game we were losing,” he said.

Now that the game is back on, Lopez said the goal will be to unite these two communities and honor the victims from the Aug. 3 shooting.

Ysleta ISD Superintendent Dr. Xavier De La Torre said at the news conference that Plano ISD’s leadership made “a hard decision” in canceling the game. But then it was suggested that the game be moved to the Ford Center.

Game details were worked out among Plano and Frisco ISDs, the Dallas Cowboys and officials with the University Interscholastic League.

De La Torre said he expects a lot of talk in the coming weeks to “make this a memorable experience for all student athletes … both of them will be inextricably linked forever as a result.”

Bonser said the district’s decision was not intended to insult or hurt the students of El Paso or anyone else, but was made solely with security concerns in mind.

“Certainly we understood the gravity of all of the emotions that would surface when you make a decision about safety that does not make everyone happy,” Bonser said. “We want opportunities for kids, but not at the expense of safety.”

Plano police were unaware of any specific threats connected to the game, spokesperson David Tilley said. Part of the initial concern stemmed from playing outside the city of Plano at Plano ISD's Kimbrough Stadium in Murphy. Kimbrough Stadium is roughly seven miles from downtown Plano.

Before the game was canceled, Plano police had discussed plans for the game with Plano ISD officials and offered to assist the Murphy Police Department with additional security, Tilley said.

Joe Parks, Plano ISD’s executive director for safety and security, said he agreed with Bonser’s initial decision to cancel the game because he couldn’t have guaranteed the safety of students at the original location.

“Obviously, this was an international media story—the event in El Paso—and that can bring things into the home town that would not otherwise be here,” Parks said. “So this was an abundance of caution for the security and safety of the citizens and the students and our staff members, and I absolutely agree with the decision to not have the game until we [had] the option up in Frisco.”

Frisco ISD's Lebanon Trail High School had been scheduled to play Fort Worth ISD’s Arlington Heights High School on Sept. 5 at the Ford Center. Frisco ISD decided to move that game to Frisco's Toyota Stadium, which was not being used that night, so that Plano and Eastwood could use the indoor stadium.

“This was such an easy decision for us to be able to support these schools and their kids." Lebanon Trail High School principal Jacob Duce said in a statement. "Whatever inconvenience this may cause us, it’s much better than students from two high schools, including football players and all the students in band, dance and color guard, missing out on that week’s opportunity to play and perform.”

Frisco ISD officials said they were happy to help.

“We’re in the business of helping kids," district athletic director David Kuykendall said in a statement. "Frisco ISD is fortunate to have some great facilities to use, and we’re glad that a facility was available.”