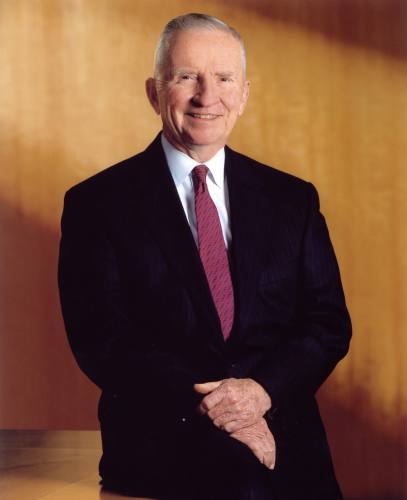 H. Ross Perot Sr., a self-made Texas billionaire and founder of the former Electronic Data Systems Corp. in Plano, died July 9 at age 89, according to a family statement.

“Ross Perot, the ground-breaking businessman and loving husband, brother, father and grandfather, passed away early Tuesday at his home in Dallas, surrounded by his devoted family," the family statement said.

Perot, who was also a former third-party presidential candidate, founded Electronic Data Systems in 1962, according to the Associated Press. The company helped other businesses manage their computer networks. When the federal government created Medicare and Medicaid in the mid-1960s, EDS won contracts from many states, including Texas, looking for help running the new programs.

“The work that Mr. H. Ross Perot put into building an iconic campus for his company back in the late ’80s created the catalyst for all of the current development you are seeing in the area,” Jolly said in a previous story. “The complex of buildings sits on a beautiful site that will be an ideal location with unique amenities, whether it is sold off to a single buyer or utilized as a complex that would be home to numerous businesses.”

EDS was also one of the companies involved in bringing the former Superdrome bicycle velodrome to Frisco. Perot's son Ross Perot Jr. and his company Hillwood are involved in the Frisco Station mixed-use project in Frisco, as well as the AllianceTexas development in northeast Fort Worth.