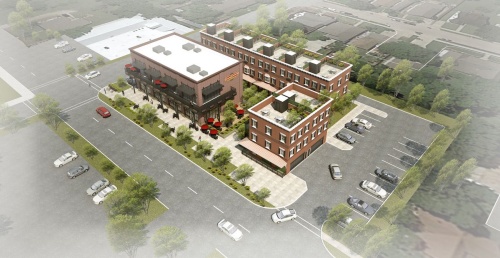 Frisco City Council approved a rezoning request for Tower at The Rail at its meeting Tuesday.

During Tuesday’s meeting, Frisco City Council approved a rezoning request for a development called the Tower at The Rail in old downtown Frisco. The council will vote on the ordinance for the rezoning request at a later meeting.

The planned project by Nack Development will be on the southwest corner of Seventh and Elm streets. The request sought to rezone the property from old town commercial to planned development to allow for a mixed-use development. The proposed Tower at The Rail development will be located at the southwest corner of Seventh and Elm streets in Frisco.[/caption]

This development is part of Nack Development’s plan to revitalize old downtown Frisco. In May, the council approved another rezoning request for another project by Nack Development called Patios at The Rail.

Nack Development President Donny Churchman said he expects to start construction on the Patios at The Rail by December.

“I expect to start construction every quarter so these projects can create synergy off each other,” Churchman said. “The projects need each other to be viable.”

Several members of the Frisco Downtown Merchants Association were present and spoke in favor of the development, saying the combination of these developments along with downtown businesses will continue to make old downtown Frisco a destination.
SHARE THIS STORY