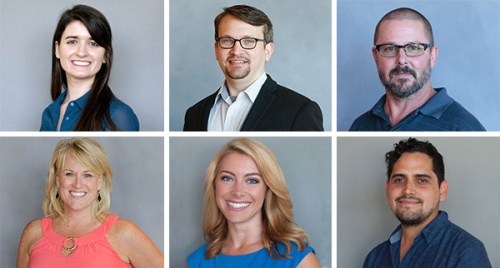 At the end of each year, Community Impact Newspaper recognizes those employees who went above and beyond their job duties to stand out among the crowd. In 2018, a winner was recognized from each major metropolitan area where Community Impact Newspaper is based. Awards were given to individuals at the department level as well as overall to the Newspaper of the Year. Here is a list of overall company winners and an explanation of their exemplary work in their department. Nominees are brought forth by managers based on numerical data and voted on by the executive team, who reviews individuals' designs, stories, sales numbers and other work from the entire year.


Newspaper of the Year 
Designer of the Year Anya Gallant has transformed into a passionate design leader, leading team Katy through many transitions, becoming a new employee mentor and helping mold new Katy team members (editors, reporters, GM). She was recently promoted to Senior Designer because of her diligence in working above and beyond, taking on additional responsibilities, refining her design process and sharing her knowledge and tools with others. She pushes the content to be the most informative and useful and is able to simplify complex topics, resulting in award-winning designs.


Newsperson of the Year Matt Dulin, who completed his undergraduate program at the University of Houston, joined Community Impact Newspaper in January. The company waited on him nearly 2 months so he could complete his role as director of community outreach and engagement at the Columbia Missourian and as a professor at the Missouri School of Journalism. Since he arrived, Pearland-Friendswood has been better than ever editorially, and the South Houston office has all benefited from his presence.

General Manager of the Year


Deeda Lovett and her team hit its monthly contract goals 10 out of the 12 months in 2018. All the while, Deeda brought her passion to the job, attending City Council and Leadership Austin meetings as well as board meetings and community events, which she often emcees or moderates. Overall, her Central Austin team had the highest overall sales performance—based on a combination of key measurements—in the company thanks to Deeda's leadership.


Salesperson of the Year

Emily Heineman joined the company in 2016, and in 2018 she led the sales team in contracts. She managed those accounts well through passionate and strategic customer service. Emily participated in the Sales Mentorship Program and, upon graduation, led office trainings and took on her own mentee. By the end of the year, she was promoted to General Manager of our Lake Houston/Humble/Kingwood market. We are excited to see what Emily will accomplish next with her community connections, strong work ethic and infectious personality.


Hero of the Year Jose Salazar joined the company in 2015 and has remained a constant on an evolving digital team, never losing his patience or loyalty, his faith in where we are going, nor his positive, can-do and helpful spirit. Jose's hard work and collaboration with others on our website has led to awards from numerous organizations including the National Newspaper Association, Local Media Association and most recently a prestigious first place award from Editor & Publisher for Best Weekly or Non-Daily Newspaper with 1 million unique monthly visitors and over. Mike Reiner has been with Community Impact Printing since February of 2017. This past year was a tumultuous year in the print industry, with harsh impacts from the paper market and the transportation industry. Mike handled both of these challenges with excellence and yielded results that are truly World Class.

In addition, Mike received the annual Courage Award, which is named after Valerie Sanders a beloved CI employee who will be forever missed. Mike demonstrated his courage after a personal tragedy. His response and work ethic was an encouragement to us all.
SHARE THIS STORY