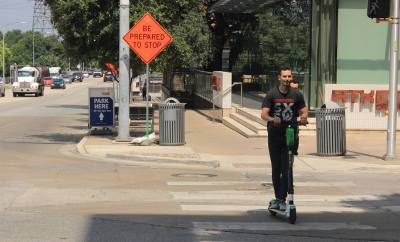 Starting Sept. 6, Austin scooter users who ride on unpaved park trails, where, per city rules, scooters are not allowed, will notice their vehicles are slowing down.

This speed-override technology, known as “geofencing,” is designed to discourage illegal scooter use on parkland, according to the Austin Transportation Department, which said the change came in response to concerns about illegal use of the devices on city parkland.

Geofencing technology has been in place at the University of Texas since March. Users riding Bird, Jump, Lime and Lyft scooters around certain parts of UT campus are limited to a maximum speed of eight miles per hour, according to UT.

Meanwhile, city officials are still discussing Austin’s rules regarding scooter use. The Austin Parks and Recreation Department initiated a pilot program in January to allow vehicles on certain trails around the city.

The department survey ended Sept. 16, and a department spokesperson said staff is scheduled to go to council in early to mid-October to present the results, at which point council will decide how to govern the devices on parkland in the future.

In May, City Council discussed implementing potential franchise rules on dockless vehicle operators in the city, which would give council the right to approve any new company intending to open up shop.

However, council put off that decision, initially scheduling the issue to return to the City Council agenda in August. However, in a Sept. 18 memo, Austin Transportation Department Director Robert Spillar said new direction from council during the budget process to incorporate funding options necessitated a delay on staff’s report until October.