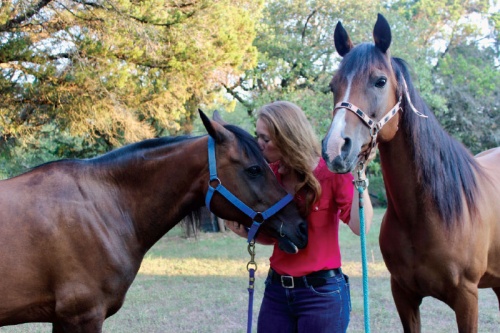 Elizabeth Cubberley, a resident on Zyle Road, said she chose to live in Austinu2019s ETJ to be close to the city while getting to keep her horses in her backyard.

As morning commuters sit in gridlocked traffic on nearby Hwy. 290 in Southwest Austin, Elizabeth Cubberley does not hear the clamor of car horns. She hears roosters and the rhythm of hooves on pavement as she walks her two Arabian horses across Zyle Road.

Cubberley and her husband, Jim, live in Austin’s extraterritorial jurisdiction, or ETJ, the unincorporated area of land beyond the city limits.

“We love our neighborhood because it provides us greater simplicity in our lives,” she said. “We love to see the stars, grow our own food, hang our clothes outside to dry, yet have access to the city just around the corner.”

Their street, Zyle Road—about 19 feet wide, with no curbs or sidewalks—is a window into Southwest Austin circa 1975. Homes on either side sit on multiple acre lots, with llamas, goats and deer grazing openly.

But, all of this could soon change. Adjacent to the semirural road lies a 165-acre tract of land that has been proposed as the future site for the 82-home Live Oak Springs subdivision.

“The residents of Zyle Road have been insulated from change since 1978,” said Paul Linehan, president of Land Strategies Inc., the developer behind Live Oak Springs. “That was 40 years ago, and it’s about time for change.”

Residential development—single-family subdivisions, multifamily apartments, duplexes and condos—is booming in Austin’s ETJ. As it stands, the city is evaluating more than 15 proposed residential developments in the portion of its ETJ located south of Hwy. 290 and west of I-35, according to city of Austin data. The developments range in size and density, from single-family subdivisions like Ring Tract, with 249 single-family homes on 87 acres, to Frate Barker Townhomes, with 61 multifamily  residential units on a 6-acre site.

The developments are converting rural communities—outside the scope of many city regulations and services—into urban-style subdivisions. For some longtime ETJ residents, this means happily trading septic systems for sewage lines. For others, increased traffic, construction and suburban-style housing are among the reasons they left the city limits in the first place.

“This type of development is causing a lot of angst today,” said Travis County Commissioner Gerald Daugherty, who represents the western portion of the county. “People want to be out in the country. They want their little piece of heaven.”


Development in the ETJ

As the city center becomes more crowded, developers are looking to build where land is available, Daugherty said. In the first six months of 2018, Austin had the highest level of per capita housing permit activity among metropolitan areas nationwide, according to the U.S. Census Bureau.

“Austin is an exciting place, and people want to live here,” Linehan said. “We’ve got to provide places for them to live.”

He said his company has completed 1,800 projects in Austin over the past 35 years—including Southwest Austin subdivisions Circle C and Steiner Ranch. Linehan said he develops most of his residential communities on large tracts of land that were formerly privately owned ranches in the ETJ.

“When I arrived in the late ‘70s, there were 250,000 people in Austin,” Linehan said. “There’s been tremendous growth, no question about it. This area has been growing very rapidly in the last 10 years in particular.”

In addition to the availability of land in the ETJ, development outside the city limits has “boomed,” Daugherty said, in part because counties do not have zoning rights. For developers, shepherding a project through the city’s processes can be costly and lengthy, he said, compared to limited regulations in the ETJ.

“A lot of people just run to the county because they don’t have to deal with the onerous requirements the city imposes,” he said. “Developers are desperate to get out of the reach of the city of Austin and find affordable real estate outside the city limits.”

Residents in the ETJ do not pay city taxes or receive city services. This includes public safety and road maintenance—emergency response, potholes and road signs—which are handled by the municipality within the city limits and the county in the ETJ, city of Austin Principal Planner Virginia Collier said.

Collier said she fears a rise in dense, urban-style developments in rural parts of the county without land-use oversight or zoning. Senate Bill 6, which went into effect in December 2017, makes the requirements for a city to annex an area in the ETJ more stringent, she said.

“The city’s authority to annex has  been stripped,” Collier said. “Potentially, there will be a lot more residential developments that don’t get to be a part of the city because of this [legislation].”

According to Travis County officials, urban-style development is occuring in the ETJ, and little can be done to curb it.

“We are now seeing dense residential development out in the county,” Daugherty said. “Everybody gets all up in a huff because they don’t want this kind of development out here. But there’s nothing the county can do about it. We can’t be arbitrary and capricious.”

The county has authority over transportation, flood plain administration and subdivision design, which includes lot configuration, said Christopher Johnson, manager of development services with the city. Municipalities like Austin have jurisdiction over environmental issues—waterway setback buffers, protections of wetlands and more—and water quality, he said. But regulations for density limits, parking requirements and landscaping do not exist in the ETJ.

“I design with the land and with the ordinances,” Linehan said. “We’re doing the best we can. We’re following the rules.”

The developer has requested two variances—a transportation variance on Flatrock Springs Drive—and an environmental variance to build a bridge over Slaughter Creek in order to provide a second point of access.

The transportation variance was conditionally approved by the county July 10. Austin’s Zoning and Planning Commission denied the environmental variance with an 8-1 vote on Aug. 7. The developers have the option to appeal to the City Council.

Representatives from Save Our Springs, Travis County’s Environmental Review Board and residents from Zyle Road and Derecho Drive spoke in opposition to the variance at the city’s
Aug. 7 meeting.

“We recognize he has the legal right to develop this land,” Cubberley said. “We want him to uphold the law to its legal limits [without variances].”

The Cubberleys and several neighbors have testified about the strains of a dense residential development in an otherwise rural setting at city and county meetings, citing safety hazards of increased traffic, water quality and detrimental effects on the character of the existing neighborhoods.

Water improvement in the area—Linehan proposed installing a waterline under the bridge—will increase the pressure plane by 20 to 30 feet of pressure for 8,100 acres, he said.

“What we’re proposing will improve the whole ETJ in terms of water protection and fire response time,” Linehan said. “In my opinion, it’s a very positive thing for the whole area.”

Still, the Cubberleys, backed by environmental organizations like Save Our Springs, said if the scale of residential developments like these were reduced—in this case they are asking for 30 homes instead of 82—variances would not be needed. The ETJ could preserve some of the quality of life and character that is driving demand to begin with,
Cubberley said.

“Our neighborhood is charming in many ways,” she said. “We are one of the last few unrestricted neighborhoods in Southwest Austin that allows many different residents—horses, ponies, llamas, goats and donkeys—that add extra flair and flavor the neighborhood.”