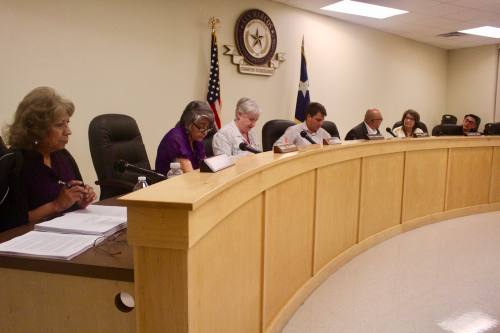 The San Marcos CISD board of trustees approved a new budget in August.

The San Marcos CISD board of trustees is getting ready to launch a budget advisory committee in the face of the largest deficit the district has projected in recent years.

School officials have said the deficit is in part due to the district providing employee salary increases—beyond what was mandated by Texas House Bill 3, legislation that requires the state’s public school districts to provide teacher raises.

Community Impact Newspaper reported in June, when the 2019-20 budget was approved by board members, that employee raises would cost the district $2.6 million.

Only a portion of the general fund balance is considered “unrestricted” or “unassigned,” meaning a school board can use the funds at its discretion. The fund balance, in addition to making up for end-year budget shortfalls, is where surplus revenue from past school years is kept.

SMCISD Director of Communication Andrew Fernandez wrote in an email that $1.3 million of the deficit is due to one-time expenses, which include—but are not limited to—equipment purchases and construction projects.

Though the amount SMCISD has to spend on one-time expenses through its operating budget may change by the end of the school year, the district’s deficit also includes about $7 million in recurring expenses.

The district’s reserves, though currently deemed “healthy” by standards generally accepted by Texas school finance professionals, has its limits.

According to school district data, SMCISD has adopted deficit budgets since the 2016-17 school year. Audit reports, the most recent of which covers 2017-18, stated that employee salary and benefits contributed to budget deficits.

When trying to get a quick diagnosis of a district’s financial health, Ginsburg said she looks at the overall general fund balance, not just the portion that is unassigned.

The Texas Education Agency, Ginsburg said, recommends an overall general fund balance that is at least equal to three months of a district’s annual operating revenue.

“Three months of your operating revenue is considered healthy; some districts exceed it,” Ginsburg said.

Despite deficits expected at the start of both the 2016-17 and 2017-18 school years, audit reports show that SMCISD ended both with a surplus and put money back into its reserve.

SMCISD’s actual operating revenue was about $72.09 million for the 2017-18 school year, according to audit reports. With an ending overall general fund balance of $44.78 million, the district’s minimum reserve-to-operating-revenue ratio was well over what the state’s education agency recommends.

As for SMCISD’s history of adopting deficit budgets, Ginsburg said the practice is not uncommon among school board finance officials.

“You have to remember chief financial officers are historically very cautious,” Ginsburg said. “So it’s not unusual to adopt a deficit budget, but to be able to know that property values will come in differently; tax collections might come in stronger; so the budget ends up being slightly better.”

Despite changes in revenue that may occur later in the year, SMCISD Superintendent Michael Cardona said the district will operate with projections presented to the board in June.

“We don’t ever know how Hays County is going to appraise values,” Cardona said.

While local revenue largely depends on the school tax rate and annual property appraisals, state appropriations are mostly determined by formulas that are designed to provide equitable funding for the state’s 1,200-plus school districts.

Federal revenue largely comes in the form of food service grants, and, for most school districts, account for the smallest portion of a school district’s annual operating revenue.

During the four audited school years, the largest amount of state revenue SMCISD received was during the 2015-16 year, when the state provided about $19.39 million. That amount dropped to about $17.78 million the following year.

Cardona said his administration, along with the school board, has focused on providing programs—such as individualized professional development for teachers—in the interest of doing what is best for students.

Though pay raises do not account for the entire deficit shown in the 2019-20 budget, audit reports cited employee salary and benefits as reasons for expected deficits in earlier years.

Fernandez said approximately $2.6 million of the 2019-20 budget is due to employee raises, including for those who are not teachers.

“The board of trustees provided a pay raise to all employees, not just those mandated by House Bill 3,” Fernandez said. “Hourly workers received an additional $1 per hour, and certified employees other than those specified by HB 3 received the same increase as a teacher with more than five years of experience.”

Cardona said he supports the school board’s decision to approve pay raises for all staff in the district regardless of their teaching status.

“You just treat people right, whether they are a custodian or a teacher,” Cardona said.

When compared to surrounding school districts, SMCISD’s reported average base classroom teacher salary in 2018-19 was higher than Wimberley, Dripping Springs and Austin ISDs, but it was lower than Comal and New Braunfels ISDs, along with Hays CISD.

Since 2015-16, SMCISD has consistently reported an average base salary lower than the state’s average.

Cardona said he thinks teachers at the district feel valued, not only due to their pay, but also due to support from administrators and school board members. The district’s average teacher salary, he said, is not purely responsible for employee retention.

“Salary is one component, but if you ask a lot of our teachers, they’re staying here because they feel valued and they feel like they’re valued from the campus leadership, school board and administrators,” Cardona said.

In terms of tax collection and revenue, SMCISD faces some unique challenges.

For one, the district—despite having a large number of economically disadvantaged students—was looking at having to be part of the state’s “recapture” program, which subsidizes Texas’ “property-poor” districts with money from “property-wealthy” districts.

Under HB 3, the district will not have to pay into recapture. Karen Griffith, the district’s former assistant superintendent of business and support services, however, has said that this status could change within three to four years.

The district also faces unique challenges from a large proportion of its taxpayers being renters. According to a Root Policy Research report published 2019, about 28% of the residents in San Marcos were homeowners in 2018. A lack of workforce and affordable housing in San Marcos, Cardona said, could impact current and future revenue streams.

“We have a large community that rents. So the economy, while it has gotten better, I would say caused some of our families to migrate,” Cardona said.

SMCISD officials will continue keeping up with district enrollment and attendance, and work with James Barton, interim assistant superintendent of business and support services, to manage the district’s finances. Griffith moved to Corpus Christi ISD at the beginning of the 2019-20 school year.

SMCISD board President John McGlothlin has also said in public meetings that he will lead a budget advisory committee to ensure that the district’s finances do not get out of hand.

As of the Aug. 19 school board meeting, McGlothlin said he is not ready to share details about the committee.

SMCISD trustee Miguel Arredondo, in a prepared statement to Community Impact Newspaper, wrote that he has confidence in the future budget committee to help manage district finances.

“I am confident that the soon-to-be formed ISD budget advisory committee, under the leadership of board president, John McGlothlin, will take a deep dive into how the district currently spends its money, find ways to reduce expenses, identify inefficiencies and ultimately provide Superintendent [Michael] Cardona with overall considerations on how to balance the budget,” Arredondo wrote.