The city of Kyle has asked the court to dismiss Kinder Morgan's lawsuit.

Lawyers for the city of Kyle filed a motion Sept. 11 to dismiss Kinder Morgan’s lawsuit against the city, based in part on the City Council’s adoption, two days earlier, of an amended version of the pipeline development ordinance on which the suit was based.

According to a preliminary copy of the new ordinance obtained by Community Impact Newspaper, the council made the changes in part to address the primary issue cited in the lawsuit, which is the charge that the city of Kyle does not have the authority to regulate oil and gas pipelines because the city is pre-empted by state and federal law.

“The City Council seeks to modify and amend the previously adopted regulations to ensure consistency with the city of Kyle’s intention not to engage in regulation or enforcement activity with respect to matters that are or may be within the exclusive jurisdiction of either the federal government or the state of Texas, including the United States Department of Transportation and the Texas Railroad Commission,” the ordinance states.

The original ordinance, which placed additional restrictions on and mandated addition requirements from both pipeline companies and developers working near pipelines, was approved July 2 after months of vocal opposition to the Permian Highway Pipeline from the Kyle City Council—whose members have been outspoken critics of the project since it first became public late last year.

In February, Kyle was one of the first cities to pass a resolution of formal opposition to the pipeline, and in April the city signed on as a plaintiff in a lawsuit over regulating the use of eminent domain by private companies.

The eminent domain lawsuit was mentioned several times in Kinder Morgan’s suit against Kyle, which calls the ordinance the “defendant’s second attempt to impermissibly interfere with the construction and operation of the Permian Highway Pipeline.”

At the time Kinder Morgan's suit was filed, Kyle Mayor Travis Mitchell told Community Impact Newspaper that it was “not unexpected.” Two weeks later, the council voted to hire Austin-based law firm Graves, Dougherty, Hearon & Moody to represent the city in court, and representatives of that firm were present at the Sept. 9 special council meeting where the amended ordinance was approved.

In addition to revising the statement at the start of the ordinance, other changes were made to the language.

Some requirements were also removed from the ordinance during the revision, though others remained.

Items that appeared in the original lawsuit but were removed from the amended one include, among other changes, the requirement that pipeline operators file an annual safety report and maintain written emergency procedures.

Many of the requirements pertaining to developers, but not necessarily to pipeline operators, were left in the ordinance.

For example, the ordinance places a prohibition on buildings that fall into the “use requiring evacuation assistant” category—which includes hospitals, schools, most nursing homes and jails—within 500 feet of pipelines, unless a developer obtains a resolution from the City Council after review from the fire chief. The same rule would apply to new construction within 200 feet of a pipeline.

A preliminary injunction hearing on Kinder Morgan’s lawsuit had already been scheduled to take place Sept. 17 at the U.S. District Court in Austin. Due to the legal issues involved, members of the Kyle City Council said they could not comment on the amended ordinance. 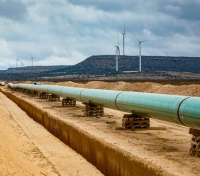