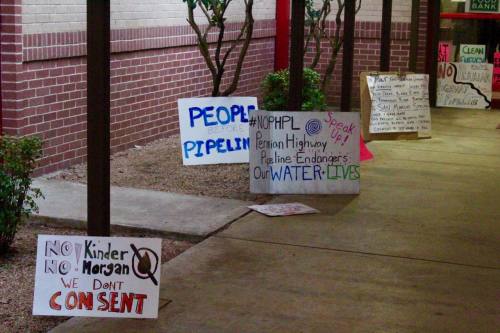 Residents expressed opposition to the pipeline at a Feb. 13 community meeting held at Wallace Middle School.

Kyle City Council unanimously signed on to a resolution at its Feb. 19 meeting, opposing the natural gas pipeline that Kinder Morgan plans to build through Hays County and asking state legislators to take immediate action to impose stricter regulations on the project.


“This item is being brought forward by the entirety of the City Council," Mayor Travis Mitchell said. "And while we recognize that resolutions are in no way binding legal documents, they certainly reflect the will—in this case particularly, I think—of every single man, woman and child in the city of Kyle."

The Permian Highway Pipeline is a $2 billion, 430-mile project from one of the largest pipeline companies on the continent. Kinder Morgan has released only an inexact map of the pipeline route because negotiations with landowners are ongoing, but it does show a path that runs just north of Wimberley before passing between Kyle and San Marcos.

Other council members joined Mitchell in condemning the plan and urging Kyle citizens to learn more about it and take action.


"It’s not time to be quiet," Council Member Alex Villalobos said. "It’s not time to sit back and let other people take care of the issue. It’s time for you to get engaged and be vocal and be active—that is my challenge."

In the months since the plan for the pipeline became public, significant opposition—evident at the public meetings Kinder Morgan held in Wimberley and Kyle—has developed in Hays County among residents, landowners and elected officials.

Much of the controversy around the pipeline has stemmed from the company’s likely ability to use the power of eminent domain to take private land along the pipeline route, which is permitted in some circumstances under Texas law as long as the landowner is fairly compensated.

In addition to the use of eminent domain, both residents and officials have said they are concerned about sensitive environmental features of Hays County and the lack of transparency and public notice around the development of the pipeline.

The three parts of the resolution adopted by Kyle City Council address these concerns, asking the Legislature to impose requirements for public process around oil and gas pipelines, which currently do not have to hold community meetings, to require “formal and thorough” environmental and economic impact studies, and to impose “substantial” oversight or rescind the power to condemn land through eminent domain.

The passage of the resolution was followed by applause from the larger-than-usual crowd at City Hall, which included former mayor Lucy Johnson, who spoke during the public comment period.


"I’ve never seen a resolution that has each and every council member's name on the title," Johnson said. "I’m just blown away and so thankful that we have the City Council in Kyle that we do. So thank you all.”

Johnson, whose family’s land is transected by the pipeline route, has been active in the opposition to the pipeline, saying at a January meeting in Wimberley that her family is “prepared to fight this pipeline with all of our resources.”

Though the state Legislature has traditionally supported pipeline construction, new state Rep. Erin Zwiener, D-Driftwood, said at the January meeting in Wimberley that potentially limiting eminent domain, as well as imposing stricter public processes, has been a topic of discussion among lawmakers during the start of the 86th legislative session.

At a Feb. 13 meeting, Zwiener told Community Impact Newspaper that in addition to supporting the already filed eminent-domain reform bills, she would be filing a new bill that would—among other measures—prohibit pipelines from carrying crude oil or hazardous liquids through areas with sensitive aquifers.


"Find out how to get involved to stop it," Tenorio said. "We can’t do it by ourselves.”