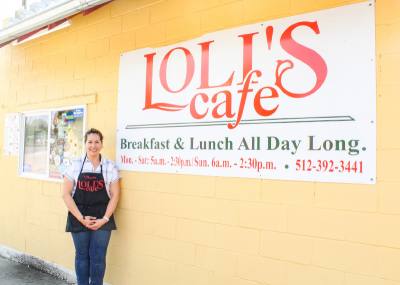 Marta Carillo opened Lolita’s Cafe—renamed Loli’s Cafe in 2016—in 2005 with encouragement from her family and a $5,000 loan from her brother.

Now 14 years later, Loli’s Cafe has been solidified as a local favorite, evidenced daily by long lines of cars that often stretch out to the street as customers wait to order breakfast and lunch tacos.

“Sometimes I don’t believe it,” Carillo said. “It’s the best gift you can have when you work and you see how people come to your place. Most of my customers [have been] ... regulars for years, and a lot of them are from the university, my babies. ... They start coming and they become regulars; and I get so used to them and then they graduate. But then they come back and say ‘I was in town on the way to San Antonio or Austin and ... [had] to stop at Lolita’s.’”

Carillo started working at the drive-thru restaurant in 1995 when it was run by different owners. Back then, the restaurant served a limited selection of breakfast tacos and chili dogs. When the owners went on to relocate their restaurant, the property owner asked Carillo if she wanted to rent the property and start her own establishment.

“I was very afraid to do that because I didn’t have the money,” she said. “My brother loaned me $5,000, so I started with $5,000. And my sister, she was a big supporter. She said, ‘You did it for somebody else for so many years. You’ll do great.’ And I started believing her.”

Carillo had to change the name of her restaurant from Lolita’s Cafe to Loli’s Cafe in 2016 because she discovered that a California taco stand had trademarked the name Lolita’s Cafe. She said she was sad at first because the restaurant was named after her daughter, and she also grew afraid that she would lose business if she was operating under a different name than the one customers had come to know and love. But that did not happen.