See what the new Buda Public Safety Building looks like 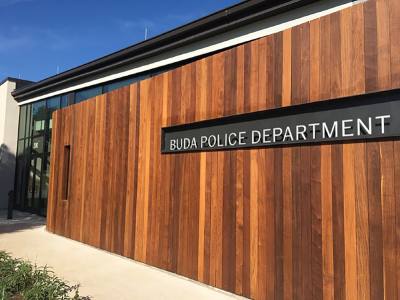 The new public safety building at the corner of Main and East Loop streets replaces the police station at 100 Houston St., Ste. B, Buda. Construction was finished on the building in mid-November.

The 14,420-square-foot building is the new home for the Buda Police Department as well as community meeting rooms.

Buda Police spokesperson Brittany Tate said staff started moving into the location during the weekend of Dec. 8, and the building will open to the public in mid-December.

The building features a gated enclosure for officer parking and has two exit routes leading to Main Street. The building also houses a community meeting room for public meetings and interdepartmental trainings.

According to Buda Public Information Officer David Marino, the city and the Buda Police Department were heavily involved in the design process to help tailor the building to the police department’s needs.

The public safety building was part of a $55 million bond approved by Buda voters November 2014.

The 54,683-square-foot municipal facility that will hold the library, city administrative offices, City Council chambers and the Buda Economic Development Corp. is next on the project list and is expected to be complete this spring.
SHARE THIS STORY