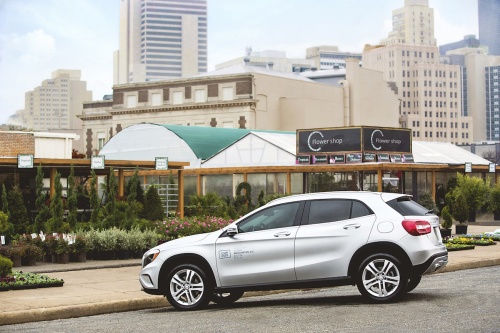 San Marcos City Council is considering working with Car2Go to launch a pilot program in the city.

The city of San Marcos has sparked discussions on bringing the Austin-based car-sharing service Car2go and the San Francisco-based bike-sharing service Spin to the area.

San Marcos City Council received a presentation Tuesday night on the car-sharing service following parking management discussions in 2014 and early 2015 that ended without any agreement to bring Car2Go to San Marcos.

Car2Go launched in Austin in 2010 as a one-way car-sharing service that allows customers to pick up and drive the vehicle anywhere through a smartphone app. Rates are calculated by the minute and there is no surge pricing during high-demand times. This preliminary map shows the proposed area in which Car2Go would provide services.[/caption]

“This is not a set-in-stone service area for the city of San Marcos,” Emery said.

The pilot program would last 12 months and would bring 25 Mercedes-Benz vehicles to San Marcos, Emery said.

The rates would be as follows:

Emery said the company is looking to phase out its Smart cars in favor of the Mercedes-Benz vehicles.

Economic Development Administrator Kevin Burke said the city would not necessarily have to designate any on-street parking spaces to Car2Go, as the company could partner with businesses, such as the San Marcos Premium Outlets, Tanger Outlets and Texas State University, to add stations.

The pilot program would bring an initial fleet of 150 Schwinn bicycles to San Marcos over the first two weeks of the pilot and expand to 550 over the first two months. The bicycles would be distributed in key transit areas, commercial zones and high-density residential areas.

Bicycles would have a locking mechanism on the back wheel that is unlocked through the company’s smartphone app, and bikes would be parked on wide sidewalks and at or near bike racks and bike corrals. Rides cost $1 per 30 minutes.

James Moore, head of market growth for the company, said Spin would partner with local bicycle shops to have bicycles inspected and maintained. San Francisco-based bike-sharing company Spin could bring a fleet of rental bicycles to San Marcos as part of a pilot program.[/caption]

For customers who do not have a smartphone, Spin also has a text-based program so riders can still rent bikes.

The company launched a pilot program in Seattle in July.

San Marcos Mayor John Thomaides said he was concerned about riders leaving bicycles in places that obstruct pedestrians, cars or cyclists, but Moore said so far in Seattle, that has not been a problem.

If the council agrees to allow Spin to operate in San Marcos, Spin would have employees patrolling the streets to ensure bikes were put away neatly in areas that do not obstruct roads, sidewalks and pathways, Moore said.

City staff is expected to pursue contract negotiations with both companies and bring full agreement proposals back to the council in the future. Both of these pilot programs would be of no cost to the city, according to the council.
SHARE THIS STORY