‘Top-flight all the time’: Round Rock updates city parks “We want to be known for our park system, and that means we have got to take care of it and it has to be top-flight all the time,” Atkins said.

He said the department works on two to three parks per year. This past year, Joanne Land Playground, Round Rock West and Greenhill bore the fruits of the department’s labor.

Atkins said the Joanne Land Playground is likely the most popular playground in the city’s entire system. In February, the playground received a face-lift with a new feature including “American Ninja Warrior”-style obstacle courses.

“If you aren’t in shape, you better get in shape to use that playground,” Atkins said.

Round Rock West Park received shaded coverage over portions of the playground, a renovation of the park’s bathroom and new fountains as well as work on the trail. Greenhill Park received a new pavilion and some renovations to the park overall.

In March, the department also broke ground on an expansion to the Play for All Abilities Park. The improvements will double the size of the park with three new play areas including an Adventure Pod which will feature an adventure hill and large net climber.

The expansion will also expand four existing pods, including the large playscape pad with additional slides and balance and spinning elements.

The department evaluates the status of parks on a 10-year basis. Atkins said all parks are rated annually, and their scores rank them on a list of priorities for the parks department. Atkins also said his department takes on projects depending on when funding is made available and the time of the year.

“We would love to do a lot of our projects September through May, but it just depends on how it all falls out,” Atkins said.

Atkins said it is hard to estimate how many individuals use the park system on a daily or even yearly basis. He estimates that roughly 1,000 people visit the Play for All Abilities Park each day, and 300-400 children play at the Joanne Land Playground daily. 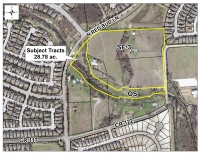