With empty land a limited commodity, redevelopment key for Round Rock

Though this portion of Mays is aging, plans are in the works to restore vibrancy. Round Rock City Council is considering an effort to beautify the corridor—which could include new landscaping features, covered bus stops, dumpster enclosures and more.

“As we look at that land and what it could offer the community, we imagine what these older shopping centers could be redeveloped into,” Hadley said. “We’re hoping this redevelopment will spawn other businesses to encourage new growth while respecting the businesses that want to stay there forever.”

Improvements to the Mays corridor are part of a broader conversation on redevelopment, which includes repurposing parts of Round Rock that have become less desirable due to changing consumer tastes or the vacating of older retail facilities, among other reasons. 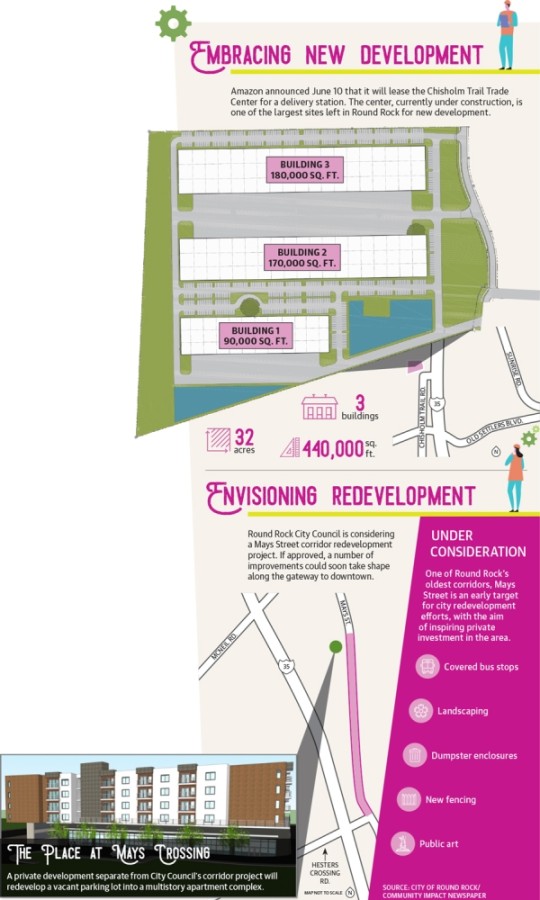 “Oftentimes when you have aging complexes, you start to see tenants leave, and it’s just not as vibrant as it could be,” Hadley said.
RELATED STORIES

• NEW: Round Rock City Council postpones its election to May 2021

In fact, redevelopment is a critical component of the city’s future growth, said Jason Ball, president and CEO of the Round Rock Chamber. Large swaths of undeveloped land—25 acres or greater—are a limited resource within the city limits. Efforts made to redevelop aging corridors, buildings and vacant lots are essential to a long-term growth strategy, he said.

With the June 10 announcement that Amazon will lease the Chisholm Trail Trade Center, a 32-acre site came off the market.

“They took one of our largest remaining sites,” Ball said. “We have so much opportunity to continue to market right now today, and we will for several years. But land, in terms of large sites to develop, is a finite resource.”

The private sector is seizing on the opportunity to redevelop within the city. RGC Multifamily is preparing to build The Place at Mays Crossing, a 244-unit apartment complex at 150 Mays Crossing Drive.

Dan Rigney, president and principal of RGC Multifamily, said plans include two courtyards—one intended to be a quiet place of reflection with water features and landscaped spaces—and the other for activities with a pool, pool cabanas and outdoor grilling space. As it stands, the land, which is adjacent to Mays Crossing Shopping Center, is being used as a parking lot.

“It’s a site that we haven’t had any development on since I’ve been here,” Mayor Craig Morgan said during a Jan. 21 council meeting. “This is an area of town that we’re really trying to redevelop.”

As local leaders plan for the future, business owner input, resident desires, plans for additional infrastructure and more will need to be considered, Hadley said.

“The approach has to be methodical and well-thought-out,” she said. “The goal right now is to develop that long-term plan.”

Redevelopment will not be a one-size-fits-all approach, Ball said. In some cases, redevelopment might look like converting a warehouse space into several offices. In others, aging structures could be razed and new buildings constructed in their place.

“We are always trying to take care of what we have on the ground—whether that’s giving it a coat of paint or giving it the opportunity to be a five-story building,” Hadley said. “That’s really what we’re here for, to give those business owners and investors a chance to be their best.”
Round Rock Chisholm Trail Trade Center Amazon Mays Street Round Rock Chamber The Place at Mays Crossing
SHARE THIS STORY