"Not like another place": Plans detail SH 130 mixed-use development in Pflugerville 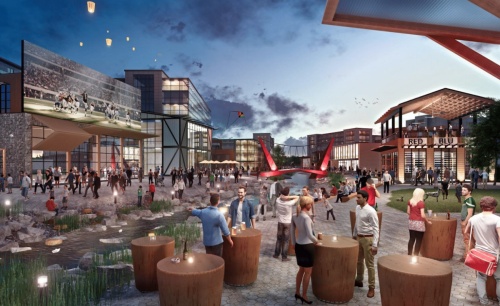 Pflugerville Planning & Zoning and Parks and Recreation commissions reviewed preliminary plans for a proposed mixed-use development along FM 685 and SH 130 during an Aug. 26 work session.

The 120-acre site, unofficially referred to as NorthPointe, includes both an east and a west campus with residential, commercial, retail, entertainment and recreational facilities. Sheleg said plans include 4,000 residential units.

The two campuses will be linked by an overpass pedestrian bridge above SH 130, which Sheleg said will "bring the two sides of Pflugerville together."

Three master plans constructed by Negba Group were designed to accommodate anywhere from low to high levels of density, depending on final plans. The development is still in preliminary planning phases and has not been finalized.

Members of both commissions acknowledged economic and aesthetic opportunities the project could provide for the city, while also raising concerns regarding the financial viability of the development along with potential safety concerns.

Willie Jackson, a member of the Planning & Zoning Commission, asked about the affordability of the retail spaces for small business owners. Sheleg said the development aims to prioritize the "mom and pop's."

Jackson pointed to other commercial spaces that have been more serviceable to national franchises than they have been to independent store owners.

Sheleg said that under the preliminary designs, the site will foster "more intimate" connections between residents and the stores and retail spaces they occupy, with more people continually being drawn to the personalization of independent stores.

Patrick Clynch, vice chair of the Parks and Recreation Commission, raised concerns about potential safety hazards that could come from a pedestrian bridge installed over SH 130. He pointed to examples of people throwing rocks or jumping off Austin-based bridges.

Sheleg said that the overpass, under the preliminary designs, will be equipped with "smart-city technology," which includes cameras and sensors to "contain, sustain and protect."

With Typhoon Texas, Stone Hill Town Center, Costco and other highly-populated facilities near development, Sheleg said the mixed-use site will help act as the heart and epicenter of activity in Pflugerville, providing for increased connectivity and enhanced mobility.

“This project, this journey, started four years ago for us," Sheleg said. "We took a leap of faith and came to Pflugerville believing this is the location and this is the place for things to happen.”

Pflugerville Planning Director Emily Barron said that this preliminary look at the development is still in its "draft form" and is "just a snapshot in time."

The Parks & Recreation Commission will revisit a proposed Public Utility District associated with the development at a special called meeting Sept. 12 at 6 p.m. Planning and Zoning Commission will again review the proposal at a Sept. 16 meeting.

Public hearings concerning the proposal will be held during Pflugerville City Council Sept. 24, and again on Oct. 8.