Victor Gonzales is Pflugerville's next mayor 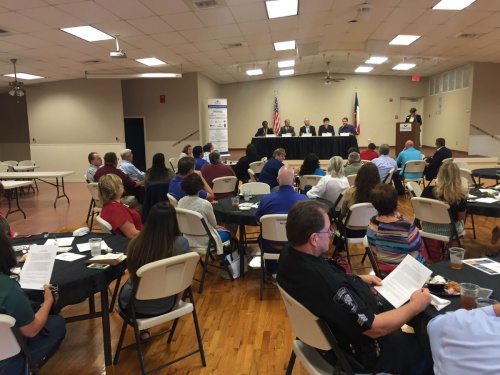 Candidates for Pflugerville mayor and city council Place 1 answer questions at a forum sponsored by the Pflugerville Chamber of Commerce.

Victor Gonzales avoided a runoff and will become Pflugerville’s next mayor. He will take the oath of office Nov. 29. The election results showed Gonzales taking 6,262 votes in Travis County and 29 in Williamson County for a total of 6,291, or 50.54 percent. The threshold for a runoff is if the top candidate has less than 50 percent of the votes.

In a message to voters on Facebook, Gonzales said he will “preserve the quality and quaint semblance of a small town community while supporting healthy growth. I will work with you to improve relationships with small businesses, develop plans for infrastructure and manage our growth responsibly.” As Election Day crossed into the afternoon, Pflugerville Mayor Jeff Coleman attended what could be his last Pflugerville Chamber of Commerce function as a city official.

Coleman, who has served the city as mayor the maximum three, 3-year terms, will be replaced by Brad Marshall, Victor Gonzales or Philip Omars-Emia. Up in the air is when Coleman’s term actually will end.

“It could be interesting,” Coleman said. "We’ll know tonight.”

Coleman knows what the future holds. His family will remain in Pflugerville and he said he is 15 to 20 years from retirement.

“I’m not going anywhere,” said Coleman, who owns a State Farm agency on Main Street. "This is a great community.”

Coleman was only contested during one election cycle. He said he's ready to move on but remain active in the community.

“I’ve enjoyed it,” he said. “Our next mayor will be a good one. I’m proud of what we accomplished. The 1849 Park, when I look back, is one of my proudest accomplishments to be a part of.”

Posted 11:15 a.m. The U.S. Conference of Mayors lists Pflugerville as one of 14 Texas cities settling mayoral elections today—or maybe not. According to the Texas Election Code, a law enacted in 1986 may keep the Pflugerville mayoral race from being decided during today's general election. If a candidate does not garner more than 50 percent of the vote, a runoff between the top two candidates will decide the race. Brad Marshall, Victor Gonzales and Phil Osars-Emia are the three candidates vying for the position of Pflugerville mayor. If tonight’s winner is short of 50 percent, a runoff will follow Dec. 13. Community Impact Newspaper will post information and results throughout the day and night.
SHARE THIS STORY