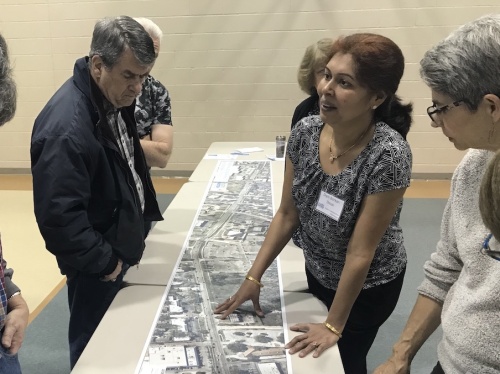 One of the engineers on the Anderson Mill Road Regional Mobility Project, Dipti Borkar-Desai, explains the project's features to local residents.

Officials from the Austin Transportation Department revealed the preliminary engineering plans for road improvements along Anderson Mill Road from Spicewood Parkway to US 183 at a public meeting Saturday.

Highlights of the proposed plans include an extension of the right-turn lane at Anderson Mill Road and US 183; new, continuous shared-use paths for walking and biking along both sides of the road; and new center left-turn lanes.

The Austin Transportation Department estimates the proposed plan will cost $6.5 million plus up to $1 million for “risk-based contingency” funding as needed. About $500,000 will come from Austin’s 2010 mobility bond, $5.5 million will come from from the 2016 Mobility Bond and Council Member Flannigan plans to use District 6’s portion of the Quarter-Cent Fund, which is a share of Capital Metro's revenue, for any additional funding required for the risk-based contingency plan.

Attendees of the open-house style meeting—including Mayor Steve Adler, Flannigan and area residents—expressed excitement over the plan’s potential impact on traffic congestion and vehicular accidents along the busy corridor.

Nina Cavanaugh, a 12-year resident of Northwest Austin, said she hopes the improvements will make traveling along Anderson Mill Road—which she uses frequently—safer and more efficient.

“On occasion I've seen ten cars behind me and three coming the other way and I know it's going to be terrible so I'll go up [through the intersection at Anderson Mill Road and US 183] and come back,” Cavanaugh said. “That center lane for me is a big deal.”

Flannigan said he thinks several of the improvements such as the continuous, shared-use walking and bike paths will increase safety, Americans with Disabilities Act compliance and access to bus stops.

"It's not just been a pain in everyone's side for many years but it's dangerous," he said. "Now that we're actually in a place where there's funding and where there's a plan, it feels so close and it is so close. We are going to get this road fixed but it has been a long path to get here."

Adler said the he was pleased to see the community’s efforts to secure funding through prior public input meetings rewarded.

“It is just really nice when you have a communities that advocate and push for their roads to be made a part of a bond project to have a whole group of people that fought really hard to make the bond project happen,” he said.

The project will now enter the design and permitting phase which will result in detailed design of the plan, addition of environmental impact assessment features, the issuance of permits and continued community engagement, according to transportation department Officials.

The design and permitting phase is projected to last through 2020 with possible construction beginning in 2020 or 2021. Officials said the timeline is subject to change, however.

See the full list of proposed improvements listed below:

More information from the Feb. 10 meeting is available at www.austintexas.gov/andersonmill.