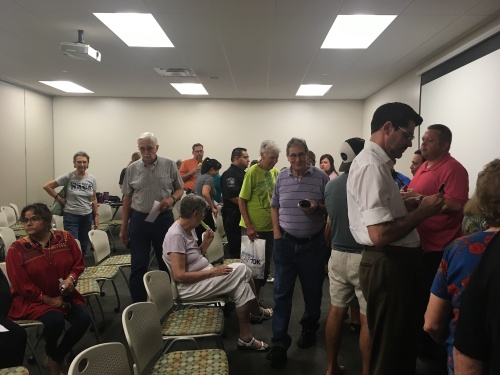 Public safety and community health are top areas of concern for members of the North Austin Civic Association, which convened a panel of neighborhood leaders Thursday evening to discuss these topics.

Schiera said the meeting was perhaps the organization's most well-attended meeting in the last two years.

Representatives of the parks and recreation department, the Austin Police Department and the Austin Parks Police pleaded for residents call 911 if they see individuals experiencing homelessness or dealing with mental health or substance use issues in such a way that prompts safety concerns.

Eight parks police officers are tasked with overseeing the city's 270 parks, according to a member of the department who spoke at the meeting, and they rely on residents to alert them to critical issues.

"If you don't call 911, that's literally the starting point for us," said APD Sgt. Lawrence Davis, who serves as the district representative for the Mobile Walking Beat.

He added that compassion is also a priority for the city's public safety departments and encouraged NACA members to remember that many of the individuals they are concerned about may be experiencing critical health and wellness issues themselves.

"At the same time, we're careful about the ethical dilemma of criminalizing someone for being homeless," he said.

Council Member Casar spoke to a number of efforts being made by Austin City Council to address these concerns.

A $925 million bond has also been proposed, which Casar said will address public safety and health concerns in significant ways.

If approved by voters in November, the bond will allocate $250 million to affordable housing.

"It's a daily health and safety issue," Casar said of the lack of affordable housing in Austin, citing the risks posed to residents by substandard housing and contentious landlords.

The bond, in conjunction with previously approved bonds, will also help fund improvements to North Austin parks, which will help promote the health and wellness of community members and address safety issues posed by inadequate lighting and other deficits.

"This is the way people die in this neighborhood," Casar said of car crashes on the city's main corridors.

The city's financial services department will host public hearings regarding the FY 2018-19 budget and tax rate at City Hall on Aug. 22 and Aug. 30.