The Apple Inc. campus off West Parmer Lane, pictured under construction here, and an upcoming expansion of the neighboring 7700 Parmer campus have the potential to open one of the last expanses of land for development in Northwest Austin, local experts say. (Courtesy Falcon Sky Photography)

Two large-scale developments in the works off West Parmer Lane may soon open the floodgate for future projects in one of the last developable expanses of land in Northwest Austin, according to local real estate experts.

Construction on the upcoming Apple Inc. campus is already well underway near the intersection of Parmer and Dallas Drive. A handful of cranes are on-site with construction of Apple’s office and research and development campus already going vertical.

These two projects, just a half-mile apart from each other on northbound Parmer, have the potential to completely change the face of the Parmer corridor—and Northwest Austin—in the next decade.

“I think it’s ripe for development,” said Charisse Bodisch, senior vice president of economic development for the Austin Chamber and Opportunity Austin. “For years, people have tried to enter that area and it is Apple that has opened that gate. I think you will see other mixed-use developments.”
RELATED STORIES

• Check out these 34 new shopping destinations in Northwest Austin

Set to welcome its first wave of employees in 2022, construction of the Apple campus off Parmer will continue throughout the next year. According to recent permits filed with the city of Austin, the international tech giant is currently constructing its office space across separate buildings, as well as a cafe and parking garages.

Apple did not respond to multiple inquiries and interview requests for this article.

As previously reported by Community Impact Newspaper, Apple revised its site plan in May 2020 to include plans for a new 75,500-square-foot, six-story hotel with 192 rooms.

The company has previously stated it will immediately employ 5,000 new workers at its $1 billion campus off Parmer. Ultimately, Apple has stated this new site can house up to 15,000 workers. Approximately 7,000 Apple employees currently work in Austin, including at its existing Americas Operations Campus located less than 1 mile away.

Roughly one year after Apple started construction on the site of its new manufacturing facility, Accesso announced it would expand its own campus, 7700 Parmer.

Accesso in late December announced it is going to build 800,000 square feet of new office space at the development, which already houses tech tenants including Paypal, eBay and Electronic Arts.

Marc Bellet, director of asset management and national director of development for Accesso, said the company has received approval to build up to 1,800 apartment units on the site, as well as up to 80,000 square feet of retail. Accesso won’t begin work on the expansion in 2021 as it irons out pre-construction details.

Apple is the one of the latest high-tech brands to expand in or wholly relocate to Austin. In Northwest Austin alone, tech giants Amazon and Facebook both occupy significant square footage of office space in The Domain.

“Austin has an unusually attractive mix of a highly educated talent pool, a critical mass of other technology and professional businesses, access to world-class research facilities, and a vibrant cultural and social scene,” said Michael Sury, managing director for the Center for Analytics and Transformative Technologies at The University of Texas at Austin. “We should expect to see more mixed-use developments such as those at 7700 Parmer continue to thrive in this environment.”

According to a July report from the Austin Chamber, jobs in Austin’s high tech industries grew by 7.7% in 2019, nearly doubling the metro’s rate of total job growth. More than 30% of 2019’s new net jobs came from the high tech industry, and high tech jobs represent 16.4% of all area jobs

Further expansion on the Parmer corridor could come as Samsung Austin Semiconductor may look to expand the footprint of its campus in the city’s northeastern sector.

According to Travis County deed records, Samsung in November acquired nearly 100 acres of property surrounding the site of its current campus off Parmer in northeast Austin.

One month after the international tech company acquired the land, Austin City Council approved a request from Samsung to rezone the site, located at the southeast corner of East Parmer and Samsung Boulevard, for industrial uses. The site runs south along Samsung Boulevard from Parmer to Braker Lane, city of Austin documents show.

Meanwhile, in the northwestern sector of the corridor, an upcoming expansion at 7700 Parmer may draw yet more tech companies.

“Office space is much more affordable in the Parmer corridor as opposed to downtown. This presents somewhat of a value for Austin. It is still expensive real estate, but that’s Austin,” said Mike Adams, director of asset management for Accesso.

The Parmer corridor’s positioning near the northernmost boundaries of Austin’s city limits also provides an amenity that other development sites across the city may not be able to offer incoming tech companies—access to affordable housing for its workforce.”

Suburban communities have been the beneficiaries of the area’s growth and have also served as a pressure valve for the upward trajectory of housing prices that has made certain areas in the Austin city limits unattainable for some,” Sury said.

The median home price in Cedar Park is nearly $70,000 lower than the mark in Northwest Austin, as defined by the coverage area of Community Impact Newspaper, according to December market data from the Austin Board of Realtors. In Round Rock, the median price of a home is $316,000—more than $100,000 cheaper than in Northwest Austin.

Neighboring cities Cedar Park and Round Rock have also developed enough in the past decade that they can provide suitable dining and entertainment options for the thousands of white collar workers expected to work out of office spaces in the next decade, according to local real estate leaders.

“It’s in the center of everything,” said Susan Horton, 2021 president of ABoR. “You can be anywhere within a matter of 30 minutes. You can be out in Round Rock or Leander in 10 or 15 minutes. It has become its own little hub.”

In order to move the tens of thousands of drivers that could soon hit Parmer, enhanced capacity on the corridor’s surrounding roadways will likely be necessary.

As part of the voter-approved Project Connect plan to bring mass transit throughout Austin, Capital Metro included an enhanced rapid-frequency bus line on Parmer that will connect the Red Line’s Lakeline station to a future train station out near Manor. From those stations, commuters will be able to connect with hubs in all corners of Austin, from the heart of downtown to Austin-Bergstrom International Airport.

Bodisch said the arterials connecting to Parmer have been well planned ahead of these developments, with the SH 45 N Toll and six-lane highways already in place in southern Williamson County.

“[The county] has been forward thinking as they’ve mapped out the county and where that growth will concur, and that will benefit the whole northwest area of Austin,” Bodisch said

Beyond the sites at 7700 Parmer and Apple, there are thousands of acres of open land—one of the last remaining chunks of land able to be developed in Northwest Austin.

In December, JLL Capital Markets announced in a news release it will represent the sale of a 193-acre plot of land on the border of Austin and Round Rock. The segment is just a small share of the approximately 8,000-acre Robinson Ranch property that spans across parts of Northwest Austin and is home to the new Apple campus.

“Even before the Apple project, it was an area that people were looking at. Land owners weren’t ready to have that area developed. Now you’re seeing more interest,” Bodisch said. 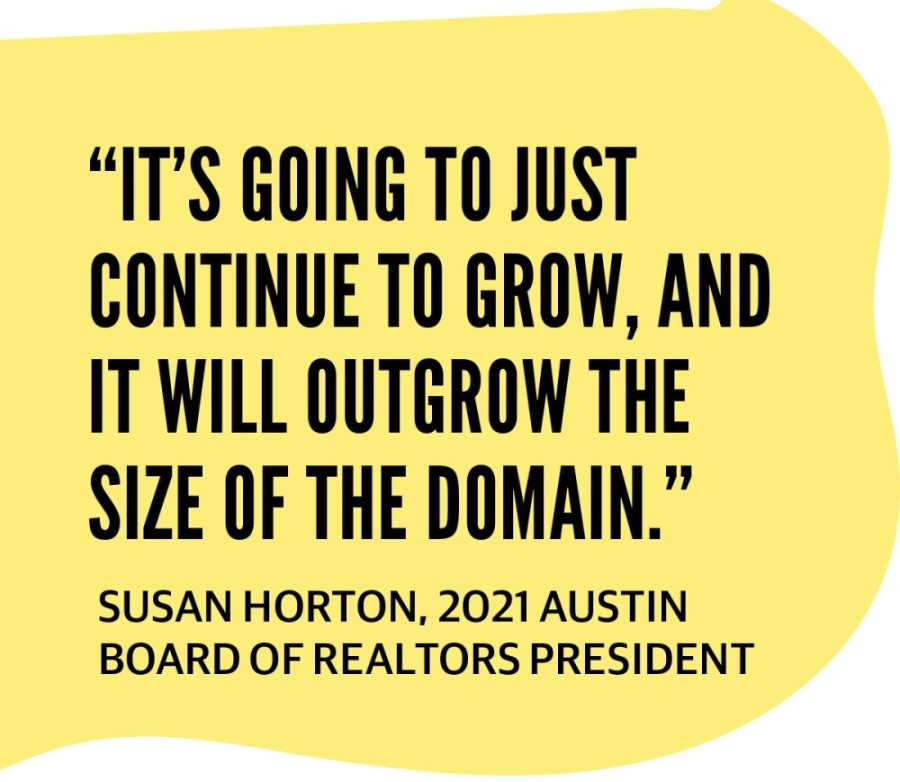 Tech companies are increasingly in the market to develop what Bodisch called “urban in suburban” campuses. These hubs, located near the boundaries of Austin, can provide live, work and play options closer to the suburban cities where tech employees are buying homes.”

Because of the volume of land potentially available to developers off the Parmer corridor, Horton believes there will be several hubs built out—possibly in the next decade.

“Based on everything we’ve already seen ... I would say that the Parmer area—on both sides of the street—are going to develop out as far out as the land reaches,” Horton said. “It’s going to just continue to grow, and it will outgrow the size of The Domain. ... It will be a city in its own city.”