The details: Apple expects to have first buildings operational at new Austin campus in 2021 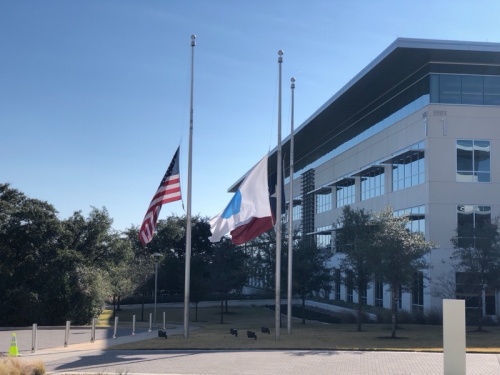 With the announcement this morning that Apple Inc. will invest $1 billion on a second Northwest Austin campus, the company is poised to become one of the largest employers in the Austin area.

The campus will be located on the Robinson Ranch property on the corner of Parmer Lane and McNeil Drive in Williamson County.

“I think this is really important for Austin, for its mobility issues and for its housing issues,” Austin Mayor Steve Adler told Community Impact Newspaper Dec. 13. “We need more than one downtown center. We need more activity centers in the city and I think this kind of activity is how we move toward that. The Domain’s turning into one. Robinson Ranch needs to be one as well.”

Apple plans to submit site permit requests to the city of Austin soon. The company plans to start site preparation and installing utilities in 2019. Kristina Raspe, Apple's vice president of local real estate, said at a Dec. 13 news conference the company expects to have its first buildings operational in 30-36 months.

Apple said the decision to build one mile away from its existing Americas Operations Center campus, also located on Parmer Lane, was certainly part of their decision making process. Having the existing campus so close by allows their employees to move easily between the two.

“It’s exciting both for the economic vitality of this part of town and expanding the Parmer Lane tech corridor that we have,” Jimmy Flannigan, City Council member for District 6, told Community Impact Newspaper. “As an anchor for the buildout of Robinson Ranch it is a bunch of jobs which are always great, not just for people [who receive them] but for our kids that are coming up through great school districts in this part of town. The preservation of natural land [on the site] will also be an asset to this community.”

Adler said when an anchor development is introduced to an area and makes a large investment, satellite businesses will likely follow soon after.

With 7,000 current employees, Apple announced its new campus could add anywhere from 5,000-15,000 new jobs to the area. The high-end estimates would bring Apple’s local employment to 22,000.

Two public entities— the state of Texas with 62,853 employees and the University of Texas-Austin with 23,925 employees including student workers—will remain the city’s largest employers, according to data provided to Community Impact Newspaper by the Austin Chamber of Commerce.

However, when only looking at businesses, Apple will likely come out on top. H-E-B is currently the largest business employer in the Austin area with 13,756 local employees, according to the chamber, followed by Dell Technologies.

Dell Technologies spokesperson Lauren Lee said 13,000 of the company’s 16,000 Texas employees are located in Austin and Round Rock.

During its first deal with Apple in 2012, the city of Austin gave the company $8.6 million in economic incentives to build the Americas Operations Center. The state also gave Apple $21 million in incentives in the 2012 deal.

"Austin’s role was in Phase 1 and I think that’s an investment that’s continuing to pay off for the residents of Austin," Adler said Dec. 13. "We’re just real appreciative of the leadership of Williamson County and the state in stepping up the way they have to keep it going. This last expansion has been the result of that initial [investment]."

Apple announced its new campus would be located on a 133 acre site. Apple’s current Austin site is just under 39 acres in size, bringing the tech company’s total local presence to about 172 acres, not including retail stores. According to Raspe, the new campus will encompass about 3 million square feet, with 2 million square feet dedicated to office space and research and development. The additional 1 million square feet will be auxiliary space.

Apple’s presence would be over three times the size of the Texas State Capitol property, which takes up 51 acres. It would also take up more than half of The Domain’s 303 acres.

In November 2016, tech company Samsung announced plans for a $1 billion dollar investment on Parmer Lane at its semiconductor on a 300-acre campus. Samsung employs 8,935 people in the Austin area.