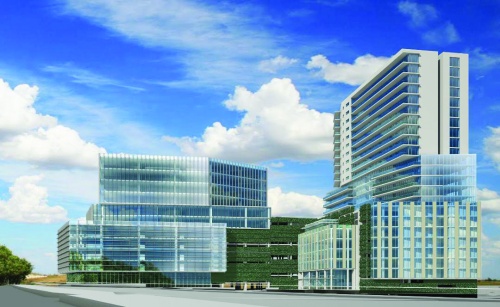 In 2011, 20 percent of Northwest Austin office space sat vacant. Seven years later that number has decreased by half, even with a fairly steady supply of new construction, according to an April report from commercial real estate services and investment firm CBRE Group Inc.

In Northwest Austin, as well as the surrounding areas that CBRE defines as North and Central Austin, companies see opportunities to open offices in environments that are appealing to employees, said Katie Ekstrom, first vice president with CBRE.

“You’re seeing a lot of need for the companies that are not building campuses with amenities built-in but that really want walkable amenities,” Ekstrom said. “That’s why you see The Domain doing so well, and The Arboretum does well, too.”

Although vacancy rates are lower than they used to be in Northwest Austin, they provide a welcome contrast to the relatively tight availability of space in downtown Austin, she said.

“As far as available space on the ground today, downtown our vacancy rate for Class A [office space] is 3 to 4 percent. It’s super tight. So now you’re seeing [growth in] these secondary markets such as the east side and South Lamar [Boulevard], and you’ll see the same thing up at The Domain and on the outskirts of it that will develop more,” Ekstrom said.

In areas such as The Domain, the office space is in high demand for companies that want more square footage than what is available elsewhere in Austin.

In May, Austin-based real estate development firm Capella Capital Partners announced plans to build a 22-story high-rise tower and an 11-story office building off of Burnet Road in North Austin. The 22-story tower will house 285 apartment units while the 11-story tower will hold 300,000 square feet of office space and 20,000 square feet of retail space.

While demand remains high in North Austin, some tenants in Northwest Austin worry that traffic congestion could deter employees from working there.

“Along Loop 360, there are a lot of tenants that are moving off of 360 just because at rush hour it’s gridlock, and you’re sitting at stoplights,” Ekstrom said. “Tenants are very frustrated with that. Having multiple ways in and around a project is really important.”

Despite the transportation challenges facing North and Northwest Austin, Ekstrom said she does not see any reason to believe that the areas are overbuilt or that the growth will slow down soon.

“We do not anticipate [the vacancy rate] dropping because we’re not overbuilding this cycle,” Ekstrom said. “It’s really been controlled, and we’re seeing pre-leasing percentages and rates that are higher than have ever been done in Austin.”