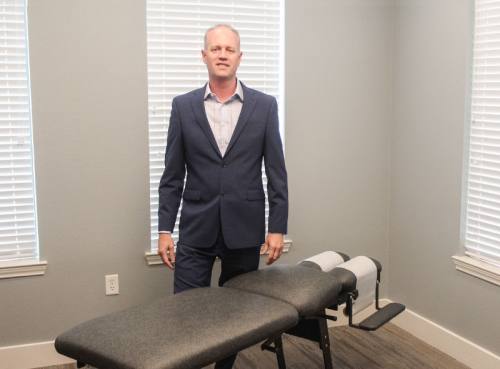 Jeff Swanson is the owner of Cedar Park Chiropractic & Acupuncture.

Jeff Swanson, owner of Cedar Park Chiropractic & Acupuncture, comes from a family of chiropractors. His uncle inspired him to become one after he treated Swanson for a sports injury in the seventh grade. Now, Swanson and his two brothers practice in the Austin area, and in total, there are about 40 chiropractors in his extended family.

“We’ll adjust each other at holidays,” Swanson said, laughing. “Say we’re at a holiday gathering, somebody will want to get adjusted.”

Attracted to Cedar Park’s small-town feel and proximity to Austin, Swanson moved to Cedar Park from Iowa and started his practice in 1999. This October marks his business’s 20-year anniversary.

“I think when I started there were four chiropractors in Cedar Park, and now I think there’s 40 or 50,” Swanson said.

Chiropractics focuses on the alignment and balance of the spine, Swanson said. Through X-rays and examinations, chiropractors determine where to adjust or correct misalignments and improve the normal motion of the spine.

Swanson treats patients with a variety of needs, including those with spine pain, neck pain, back pain, headaches, migraines and arthritis. He said patients come in after experiencing sports injuries or car accidents, and he often sees pregnant women and people in the tech industry in Austin who have posture-related issues from sitting at computers.

Swanson also offers acupuncture, the practice of inserting needles to various parts of the body to relax tight muscles and improve blood flow.

“We use it for pain relief,” Swanson said.

For the last decade, Swanson’s business has been the official chiropractor for the Texas Stars, the American Hockey League affiliate team of the NHL’s Dallas Stars. Swanson treats hurt players and helps them prevent injuries. He and his two brothers rotate attending games at the H-E-B Center at Cedar Park, treating players as needed in the locker room.

“It’s fun to treat outside the regular office and a different patient population,” Swanson said.

Over the years, Swanson’s practice has been able to give back to the community. He said it donates a portion of profits to nonprofits and church organizations, such as Samaritan Health Ministries and the YMCA.

While the growth in Cedar Park has led to growth in his patient base, Swanson said he has also noticed more people looking for alternatives to medicine and surgery come to his practice. He said growing concerns about addiction due to the opioid crisis have encouraged people to explore options such as chiropractics.

“People would rather get to the source of what’s causing their back pain or headaches versus just covering up the symptoms,” Swanson said.