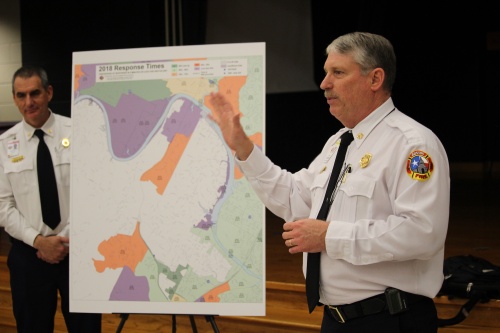 Bridge Point Elementary School on Jan. 16 hosted the Austin Fire Department along with several area residents for an open house held to provide information and answer questions about the need for a new station in the Loop 360 and Davenport area in Northwest Austin.

The open house was part of a multipronged effort by the city to bring more emergency services to underserved areas throughout Austin. AFD Assistant Chief Larry Jantzen said during the Jan. 16 event resident feedback is a crucial part of the process when identifying the best location for a new station.

“We go out to the areas where people want to have a station built or need a station, and we get community input,” Jantzen said. “We tell them why we’re doing it, we get some input from the community, and sometimes they can help us navigate hurdles like identifying the actual land that we want to put the station in.”

Following risk and service delivery analyses dating back to January 2016, Austin City Council passed a resolution in May 2018 asking city management to develop a plan to build five fire stations throughout the city in a 6-year period. Beyond the Loop 360 and Davenport area, plans include stations for Travis Country, Del Valle, Goodnight Ranch and Canyon Creek.

Information from the office of District 10 Council Member Alison Alter states council allocated $12 million to the first phase of the design-build contract. That money will be for the first two fire stations: Del Valle and Travis Country. The buildout of the remaining fire stations will come back to council for additional authorization.

Regarding the Davenport/Loop 360 fire station, the search for a suitable site is still ongoing, Jantzen said. Once an appropriate location is found, the city will have to acquire the land and then move to the next stages.

“This particular area out of the five stations that we have identified that we need to construct, we don’t own any property out here yet, so we’re asking the community to help with that, to a degree—to identify a spot that we could secure some property,” Jantzen said.

AFD wants to improve response times in the Loop 360/Davenport area to increase the percentage of calls responded to in eight minutes or less, Palmer said, adding AFD’s standard goal is to achieve that response time for 80-90 percent of calls.

“Unfortunately, in the areas that you see [in between stations 31 and 902], we are not achieving that goal,” Palmer said, pointing to a map illustrating several large areas in the Loop 360/Davenport area with 8-minute-or-less response rates at less than 50 percent.

“It’s hard to get from point A to point B because there’s a valley, or you’re on a hill, or there’s no street network,” Thies said. “So, all of those things that impact you all, getting to H-E-B or wherever you need to go, it impacts us getting to an incident.”

Open house attendees had several questions for AFD firefighters involving topics ranging from noise created by new fire stations to site requirements to the size of the road needed to build a new station.

Jantzen said the next step is to examine community input from the Jan. 16 open house in order to help move forward plans for a new station in the Loop 360/Davenport area.