Large multi-use development up for consideration in Bee Cave 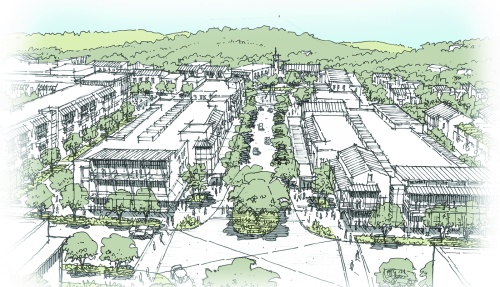 The City of Bee Cave could soon get another major multi-use development.

A proposal coming before the Bee Cave City Council and Planning and Zoning Commission Tuesday, Aug. 28, will mark the beginning of a consideration process that will carry into public hearings in September and October.

The proposal is for an 80-acre mixed-use real estate development called The Village at Spanish Oaks. The project would be a joint venture between Spanish Oaks developer CCNG, Inc. and Arizona-based Greenbrier Southwest Corporation. Included in the proposal are room for shops, restaurants, office buildings, an upscale inn and spa as well as a wide range of residences, according to a press release issued by the developers.

Made to feel like “an intimate, walkable village,” according to the press release, the project will be located off Hwy. 71 West, adjacent to the Spanish Oaks residential community and golf club.


Progression of The Village at Spanish Oaks development by date:

The Village at Spanish Oaks by the numbers: