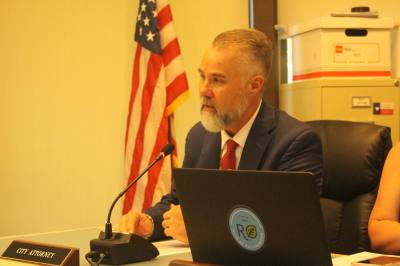 The city of Rollingwood is in the process of appointing the law firm of Denton Navarro Rocha Bernal & Zech PC to provide legal services as city attorney.

But before that can happen the city needs a written resignation from its acting city attorney, not just an oral resignation.

City Council was set to pass a resolution during the May 15 regular meeting that specifically designates firm shareholder Charles E. Zech as the city attorney. The resolution states the lawyers of the firm would be designated as assistant city attorneys authorized to provide legal services to Rollingwood at the direction of Zech.

Prior to what would have been a vote to appoint Denton Navarro Rocha Bernal & Zech, Mayor Michael Dyson said the city has not yet received a written resignation from the firm Scanlan, Buckle and Young PC, which is technically still the acting city attorney. Zech began serving as special counsel during the May 15 meeting, but added he would also like to have an official resignation from Scanlan, Buckle and Young before he and his firm officially accept the role.

To make the process official, Alderperson Amy Pattillo reintroduced the agenda item later during the May 15 meeting and council voted to accept the resignation of Scanlan, Buckle and Young pending written notice and to appoint Denton Navarro Rocha Bernal & Zech as city attorney pending effective receipt of the resignation.

Scanlan, Buckle and Young has served as Rollingwood’s city attorney under the leadership of Doug Young since 2012, according to City Administrator Amber Lewis.

The hourly rates for Denton Navarro Rocha Bernal & Zech—$210 per hour for the senior attorney fee—are higher than Scanlan, Buckle and Young's senior attorney rate of $170 per hour, but Lewis said it is too soon to know if the new rate will affect the city's budget allocation for city attorney.

It will depend on how much the city needs to bill the firm, Lewis said.
SHARE THIS STORY