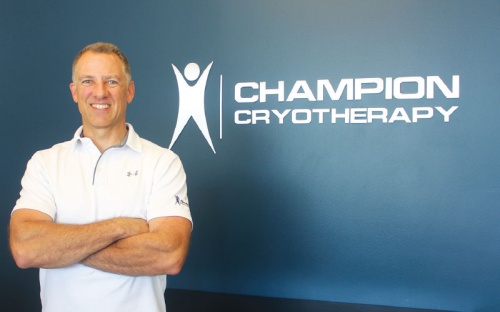 Pendleton opened his business in October 2016.

After sustaining a shoulder injury from working out, Todd Pendleton said it was hard to find treatment close to home.

The Steiner Ranch resident researched his options and found a cryotherapy business in Bee Cave where he went daily for a week. Relief was instant, he said.

Pendleton first heard about cryotherapy from the NBA's Dallas Mavericks—he grew up in Dallas—and how it aided their performance, he said. The therapy is similar to ice baths that help athletes recover faster from injuries.

“Those athletes who depend on their athletic performance for their livelihood when asked what are [they] doing to recover, cryotherapy is always in that recovery regimen,” Pendleton said. “They wouldn’t do it if it didn’t work.”

Whole-body cryotherapy involves a person standing in a cold-air sauna that is pumped with liquid nitrogen at a temperature ranging from minus 135 to minus 200 degrees Fahrenheit for 3 minutes.

Cooling the body rapidly tricks it into fight-or-flight mode, he said. As the body sends blood to the core organs, the cardiovascular system cleanses out inflammatory enzymes and toxins in the blood and replenishes blood

Since opening his own cryotherapy business in October 2016, Pendleton said the biggest challenge has been client education about the therapy.

“I didn’t know the second market challenge, which would be everyone has the reaction, ‘I don’t like being cold,’” he said.

It usually takes some sort of trigger event—an injury or upcoming race—to inspire someone to try cryotherapy, Pendleton said. Being located on RM 620 also allows him to tap into the health-conscious demographics from Lake Travis to Cedar Park.

“I thought this would be a fun demographic to be planted in and helping,” he said.