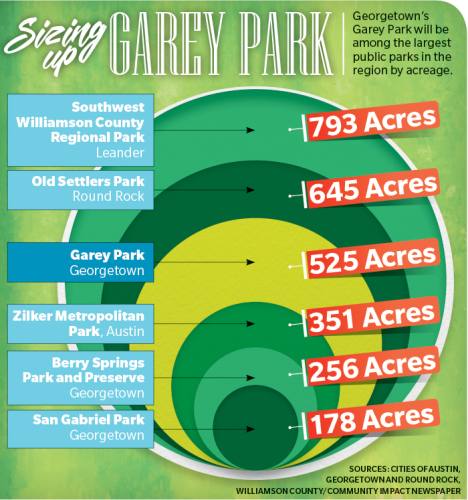 Georgetownu2019s Garey Park will be among the largest public parks in the region by acreage.

When Garey Park opens June 9, Georgetown officials expect it will appeal to locals as well as visitors from around Central Texas.

“It will be a regional draw,” said Georgetown Parks and Recreation Director Kimberly Garrett.

Once completed at a cost of $13.5 million, the 525-acre Garey Park will be one of the largest municipal parks in Central Texas, shy of Round Rock’s 645-acre Old Settlers Park but about 1 1/2 times larger than the 351-acre Zilker Metropolitan Park in Central Austin. The park’s opening at 6450 FM 2243 between Georgetown and Leander will follow 15 months of construction, three years of design and more than a decade of planning.

Jack and Camille Garey announced in 2004 they would donate the parkland to the city along with
$5 million for construction and future development. For the city of Georgetown, rising land values and expanding private development make it unlikely a park of that size could develop without help from benefactors, Garrett said.

Garey Park will feature a variety of amenities, including hiking trails, an equestrian arena and an event center. It will be the first city park in Georgetown to charge visitors entrance fees.

Along with the land and money from the Gareys, a $35.5 million parks bond package approved by Georgetown voters in 2008 included $10 million for Garey Park, which is located in Georgetown’s extraterritorial jurisdiction about 6 miles west of I-35.

The Gareys’ former home on the property will be repurposed as Garey House, an indoor and outdoor event space for weddings, retreats and other occasions. The park will include an equestrian area and 6 miles of equestrian trails, a playground, a splash pad, a dog park, rentable pavilions and 3 miles of hiking trails.

“The city is thankful for this tremendous gift from the Gareys that has become a public park for all of us to enjoy,” Georgetown Mayor Dale Ross said in a news release from the city after news broke in April that the park was ready to open. “Garey Park will be a regional destination for outdoor recreation as well as a beautiful Hill Country setting for special events. With features similar to those found in state parks, this park is surely a gem for the city of Georgetown and one that our residents and visitors will enjoy for many years to come.”

Jack Garey, also in the news release, said he looks forward to seeing the finished product.

“There is a lot for everyone to enjoy,” he said.

Now retired, Jack Garey built his wealth through several careers, including as a lawyer, real estate developer and owner of a construction company.

“When you think about most of our parks, they are city parks, but I think Garey Park represents the ability to draw [visitors] regionally,” Nicholson said.

Along with being Georgetown’s largest park, Garey Park will also be the first to charge entrance fees for residents and nonresidents, Garrett said.

The Gareys’ donation carried a stipulation that their money could not be used to cover the park’s maintenance and operation costs, which the city estimates will be about $884,000 annually during full fiscal years in operation, according to city estimates.

Park visitors who rent pavilions or the Garey House event space will have entrance fees included in their rental rates, Garrett said.

The original vision of Garey Park was actually grander than the version that will open in June. An initial planning process that began in 2005 proposed additional amenities such as overnight camping sites and an amphitheater. Garrett said plans had to be scaled back when development estimates for the park in 2016 came in over budget at $22 million.

“We decided that we would concentrate and focus on the front of the property and do the active amenities and the house, because that was a huge draw for the community,” Garrett said.

Additional capital improvements could come at a later date, Garrett said. Jack Garey agreed in 2015 to donate an additional $5 million of his estate after his death to further develop the park.

The director presented a five-year capital improvements plan April 24 to City Council for consideration that proposed more than $27 million in park projects over the next half-decade, including continued work at San Gabriel Park and developing new parks in Georgetown’s northwest and southeast areas.

The parks department will also focus on developing a trail extension along the South San Gabriel River from the outskirts of Georgetown’s city limits to Garey Park, Garrett said. The extension would add about 7 1/2 miles of new trail to the city’s trail system, which has about 9 1/2 miles of trail already, she said.

“Trails have always been the No. 1 amenity requested by our citizens,” Garrett said.