I-35 work ‘messy’ but necessary for local access in Georgetown, officials say 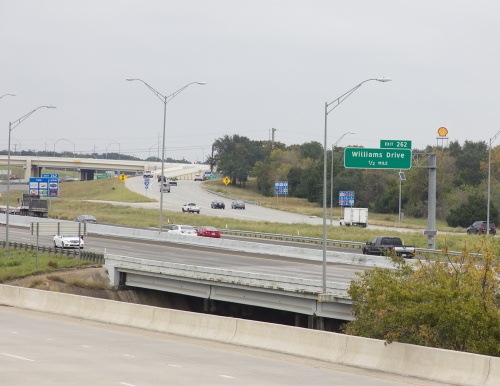 I-35's proposed toll lanes would not extend into Georgetown, but TxDOT has been working on smaller projects to address areas of traffic congestion in the city, including at I-35 interchanges at Hwy. 29 and Williams Drive, Georgetown Transportation Planning Coordinator Ed Polasek said.

An $8.1 billion plan to improve traffic on I-35 could have big results for Central Texans—but not without major headaches during years of construction, especially for Georgetown residents who commute south to Austin for work.

On Oct. 30, the Texas Department of Transportation unveiled its updated Mobility35 plan for Central Texas to add two additional lanes that could be tolled in each direction between Round Rock and Buda, depress the main lanes through downtown Austin, make other improvements throughout the three counties and keep the existing number of nontolled lanes.

“It will be messy, particularly downtown when we reconstruct I-35,” said Terry McCoy, Austin district engineer for TxDOT and a Georgetown resident. “We’ll do the best we can in phasing that, but there will still be some impact on the traveling public.”

Mobility35 also includes other projects such as I-35 interchange improvements in Georgetown.

“Everybody in Central Texas who’s an elected official is working on mobility challenges. This is just another solution. [The interchange improvements] will alleviate some of those traffic issues in Georgetown,” Mayor Dale Ross said.

“We’re working together with our partners at the county and state; this is going to be a great project.”

Planning for I-35 improvements in Central Texas began in 2011 after the Texas Legislature earmarked $300 million to improve mobility in the state’s most congested corridors. Central Texas received about $31 million of these Rider 42 funds.

“If you think about where we started, we had nothing,” McCoy said. “We started this basically looking for some solutions and, as we identified them, looking for some funding. We’ve been able to marry the two together and started from a program with no ideas and no funding to where we’ve gotten today.”

If the new lanes on I-35 were to be tolled, TxDOT would face challenges in funding those lanes because funding from propositions 1 and 7 cannot be used to build tolled facilities.

“We have other sources of funding that we’re looking at, and we’ll really look under every cushion on the sofa to try to pull this together,” McCoy said. “Once we know how much money we have to work with, we’ll start talking about how we start putting the building blocks together.”

Additionally, in a Nov. 16 letter to the chairman of the Texas Transportation Commission—the governing board for TxDOT, Lt. Gov. Dan Patrick stated he opposes TxDOT’s plans to add toll lanes on 15 projects in the Unified Transportation Plan, the agency’s 10-year plan for construction, development and planning activities.

The Capital Area Metropolitan Planning Organization, which is the regional transportation planning group for Central Texas, has prioritized I-35 for when funding comes through. The organization, whose board comprises local elected officials, voted in late 2014 to award Proposition 1 funding from that year to I-35 projects.

Next spring, the public will have another opportunity to weigh in on the Mobility35’s environmental assessment that looks at the impact to the community and environment, Mobility35 Program Manager Karen Lorenzini said.

“This stage is where we need the most public input,” she said. “In this stage, we do preliminary design, and we do enough design so we know the project is feasible.”

The proposed toll lanes would not extend into Georgetown, but TxDOT has been working on smaller I-35 projects to address areas of traffic congestion in the city, including at I-35 interchanges at Hwy. 29 and Williams Drive, Georgetown Transportation Planning Coordinator Ed Polasek said.

Although local construction along I-35 over the next few years may be inconvenient for residents, Polasek said he thinks the growing pains will be worth the increased mobility and economic opportunity the projects will provide once they are completed.

Finishing a new section of I-35 frontage road northbound from Williams Drive to Lakeway Drive is one example of an improvement that will have an effect on surrounding infrastructure and development, Polasek said.

“We’ve had people look at developing that property [along the future frontage road] for years, and once you get [the frontage road], it will really help that potential development as the city grows,” he said.

With growth in the I-35 corridor, Polasek expects TxDOT to develop additional road projects on the Georgetown section of the highway, possibly even a future extension of the proposed toll lanes.

“Sooner or later, when those projects are done, they’ll move north,” Polasek said. “It’s not just going to stop there and never happen. We just have to be a little patient, and it will happen here eventually.”

Construction of the four additional I-35 lanes, if funded, would not begin until at least early 2021 when several other key regional projects are completed, McCoy said.

The Central Texas Regional Mobility Authority—which builds and oversees some area toll facilities, including express lanes on MoPac—will complete its US 183 South toll project in 2020. That $743 million project is adding three tolled lanes in each direction on US 183 between Hwy. 290 and SH 71.

TxDOT is still working out how to fit in four lanes, but he said in areas with the least amount of right of way, TxDOT likely would have to build two levels below ground—one level for the new lanes and one for the main lanes—to have the frontage roads and cross streets remain at surface level.

TxDOT ultimately plans to extend the new lanes through Hays and Williamson counties, but McCoy said the plan is to prioritize the area with the most congestion: downtown Austin.

“That’s what we’re trying to address in the shortest time frame,” McCoy said. “But we’re not giving up on Williamson or Hays counties.”
SHARE THIS STORY