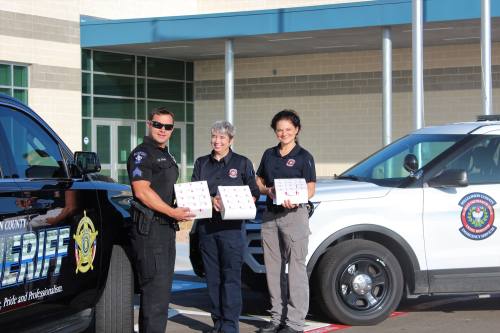 The Mobile Outreach Team distributes Narcan, an antidote to overdose.

Since the Opioid Emergency Response Pilot Project began in the city of Round Rock in 2018, approximately 25 lives have been saved, said Annie Burwell, director of the Williamson County Mobile Outreach Team.

The Williamson County Commissioners Court heard an update on the program Oct. 1 and voted to contract directly with the Texas Health and Human Service Commission to receive the funding for the pilot program.

The court initially agreed to take over the pilot program's administrative needs from the city of Round Rock during a July 30 meeting. The organizational move to the county level would allow the program to expand its reach throughout the county, Burwell said.

The program is funded through the Texas Targeted Opioid Response grant and allows for three paramedics, housed in Round Rock Fire Station No. 6, and Williamson County Mobile Outreach Team members to respond to potential opioid overdoses with preventive medications, such as Narcan, Burwell said.

“Opioid response is a continuum of care," Burwell said, "and what the state is asking us to do is to focus on [emergency response]—when a person overdoses, how to save their life and how to get them services as quickly as possible to increase their likelihood of survival.”

Burwell said the program has since distributed 17,000 doses of the overdose antidote naloxone and registered 95 high-risk patients to the program, where team members support patients until they are placed in a long-term care facility. In addition, the program has provided over 50 overdose rescue classes to local law enforcement, Burwell said.

“It takes a lot of people in this village to work on this program,” Burwell said.