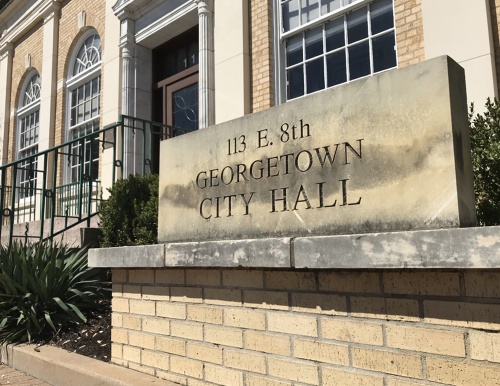 One of the historic review board’s primary duties—granting certificates of appropriateness for alterations to historic structures in Georgetown—could shift to City Council should a proposal Tuesday from Council Member Kevin Pitts receive enough support.

Council members voted, 5-2, to have the city attorney draft an ordinance to change bylaws of the city’s Historic and Architectural Review Commission, or HARC. Rather than grant certificates, the commission would make recommendations to City Council, which would have final say. Council members Anna Eby and Rachael Jonrowe voted against the proposal.

Should an ordinance move forward, a council vote would likely happen in late fall.

Reading a statement from the dais Tuesday, Pitts argued that decisions over certificates should be made by City Council in order for Georgetown to provide consistency and faster responses to property owners who apply to make changes to historical structures in the city’s center.

“With my suggested changes I believe downtown will continue to be the good place to do business that it is today and the city of Georgetown will be easier to do business with,” Pitts said.

His original proposal sought to have certificates of appropriateness removed entirely from HARC and instead handled by the city’s Planning and Zoning Commission. A motion on the original proposal was amended by Council Member Valerie Nicholson before she and Pitts joined council members Steve Fought, Tommy Gonzalez and John Hesser in support.

Over the course of about two hours Tuesday, council members heard from more than 20 speakers opposed to the changes.

“We have a 37-year legacy of historic preservation here in Georgetown,” McCalla said.

Michael Walton, president of Preservation Georgetown, which offers grants for historic rehab projects, said HARC has been critical to preserving the city’s historic buildings. Walton said rather than bypass HARC, the council should identify specific changes that could improve the commission’s work.

Certificates of appropriateness are required when owners of historic properties want to undertake renovations or demolitions.

Although HARC grants certificates, applicants can appeal denials to City Council, which requires at least five votes to overturn the commission, according to city code.

Earlier during Tuesday’s meeting, the council voted, 5-2, to overrule a previous HARC decision to deny a certificate of appropriateness for demolition and renovation work on a proposed event venue at 511 S. Main St., Georgetown, known as the Wish Well House. Eby and Jonrowe voted against the decision.

Prior to voting on Pitts’ proposal, council members debated the proposed changes. Jonrowe and Pitts sparred over the need for removing authority over the certificates from HARC, with Jonrowe arguing that the commission’s decisions have rarely sparked appeals over the past three years.

Eby said she did not see rationale for changing the commission’s bylaws.

Fought said he thought the proposal was worth consideration.

“I think [Pitts’] proposal is worth fleshing out. … I want to see what the city attorney comes back with,” Fought said.

Georgetown’s most recent historic resource survey, which was adopted by council members in August 2017, included 1,677 properties in the city’s historic areas.