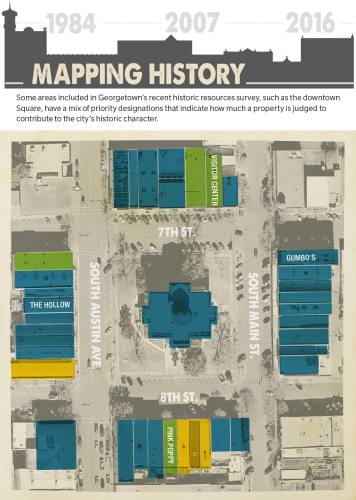 An appraisal of Georgetown’s historic properties is expected to help City Council craft future building policies in hopes of preserving many of the city’s older
structures.

“What will be particularly interesting to me going forward is what council will do with that information,” said District 6 Council Member Rachael Jonrowe, whose district contains many of the properties included in the survey. “That’s going to be the next step ahead of us that I hope people will pay attention to.”

Each property in the survey was assigned to one of three priority levels based on what the property adds to the city’s historic character. More than half of the surveyed properties were given low-priority historical designations, but several council members shared concerns this past summer that owners of high-priority properties could face regulatory and financial burdens when modifying their homes or buildings due to those properties’ designations.

Surveying history
The recent survey is the third undertaken by Georgetown officials and includes a list of properties, structures, buildings and objects in and around the city’s historic districts, Planning Director Sofia Nelson said.

Similar surveys took place in 1984 and 2007. The most recent survey focused on properties that were built in 1974 or earlier.

The survey cost $100,000 to complete and was funded through the city’s fiscal year 2016-17 budget, City Manager David Morgan said at an August workshop.

Properties included in the survey were given either high, medium or low priority designations. To determine a survey listing’s priority level, city staff and consultants from Cox-McLain Environmental Consulting Inc. used aerial maps, historic documents and sometimes even oral history from property owners themselves, Nelson said.

The church was founded in 1869 by an early Texas missionary in the African Methodist Episcopal Church, according to the Williamson County Historical Commission. Church trustees purchased land on Fourth Street in 1881. Services were held in a small wooden building until 1904, when the chapel, designed in an architectural style known as Carpenter Gothic, was built.

Properties given medium priority in the survey retain historical character but may have been modified to some degree—such as a house with a porch that was originally built with two columns but whose owners later added a third, Nelson said.

Low-priority properties are not considered to be associated with a historical trend in the city, or they have been significantly altered.

Changes to high- or medium-priority properties that are within Georgetown’s downtown or Old Town overlay districts require greater regulatory oversight than properties outside of those districts or properties ranked low-priority, Nelson said.

Denise Page, owner of the Gumbo’s North restaurant at 701 S. Main St. on the Square, said she loves her restaurant’s location and building she rents, a former Masonic lodge that has maintained high-priority status throughout all three of Georgetown’s historic surveys.

Page said operating a business inside a historic building has advantages but also comes with challenges, particularly since renovations or upgrades—even seemingly small changes, such as changing the business’s external paint color—must receive city approval.

“People love [the Square],” Page said. “It’s beautiful, and there are always people around. But along with the advantages, there are quite a few disadvantages (of being located in a historic building or area).”

Renovations can be expensive, since any changes to the building her business is in must maintain the building’s original appearance as much as possible, Page said.

“It just becomes a pain. You might not get to do what you want for quite some time. Those kind of constraints are difficult,” Page said.

Georgetown Mayor Dale Ross said during an Aug. 22 City Council workshop that he believes the city should consider how to help property owners with high-priority designations, describing them as owners who have to follow “rules that don’t apply to others.” Ross said the city could consider looking into helping property owners with costs associated with maintaining or renovating historic properties.

Moving forward
City Council members have not yet decided how to use the survey to set future policy, but Jonrowe said she hopes the council will protect the city’s historical structures while offering incentives for property owners who want to update their properties.

“Some of my fellow council members fear that we will have unruly regulations that put an undue burden on the property owners, and I understand that. I don’t want this process to be frustrating for anybody,” she said.

Owners of properties included in the survey will likely be the most affected by how the council decides to use the survey’s information, but all Georgetown residents have a stake in preserving city’s history, Jonrowe said.

Although Georgetown is growing rapidly, Jonrowe said the city’s valued historic roots make it important for changes made to structures included in the survey to be monitored by city officials and residents, she said.

“Does that maybe mean sometimes you have to jump through a couple more hoops to do the project you want to do as a home or property owner? Yes, but I don’t think we have unreasonable expectations on that front,” she said.

How City Council uses the recent survey will likely have an effect on Georgetown, especially its Old Town district, for years to come, Jonrowe said.

“Whether you live in Old Town or not, your neighborhood and its future is tied to Old Town,” Jonrowe said. “We call it the jewel, the heart of Georgetown, and it’s called those things for a reason. If we do not put the policies in place to nurture and preserve these resources, then I think we’ll lose our heart. Georgetown wouldn’t be the same without Old Town.”