Ahead of vote on proposed lesson changes, parents weigh in on Austin ISD sex education curriculum 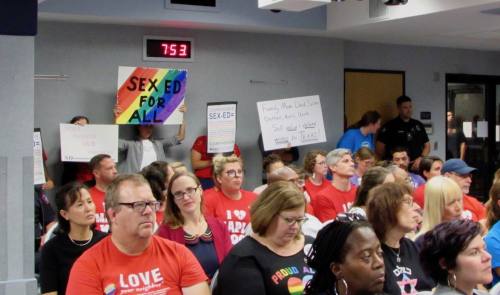 Austin ISD will not vote on proposed lessons for the district’s new sexual education curriculum until its October meeting at the earliest, but numerous parents spoke at the Sept. 23 board of trustees meeting both for and against changes to the curriculum in anticipation of the coming action.

Trustees in February unanimously approved an updated Human Sexuality & Responsibility curriculum scope and sequence—an outline detailing in which grades certain sex education topics will be taught in the district. The specifics of that curriculum, which has not been updated in 12 years, will be up for final approval later this fall.

At that February meeting, about two dozen parents, residents and students held pro-LGBTQIA signs and pride flags to show support of the district’s work toward adopting the new curriculum, one they felt would be more inclusive for students of all sexual orientations and beliefs.

Concerned Parents of Texas—a local group that opposes comprehensive sexuality education, which they call a weapon in the war on the “innocence of children”—organized outside the board auditorium Sept. 23, singing songs and speaking up against the district’s proposed changes.

"I oppose the approval of the sex ed program because in that curriculum sixth graders will be engaging in written scenarios to propose solutions to homophobia," Caryl Ayala, who co-founded the local group, said during public comment. "This will create a climate that pits students against one another, and violates students' rights to hold a different opinion regarding boundaries of sexual behavior according to their family's values."

As a member of the Hispanic community, Ayala said she is offended that the school district is "grooming 46,000 Hispanic children to accept these behavior," and considers the curriculum "a direct assault" on Hispanic family culture.

"Please focus on reading, writing and arithmetic," she said.

She also asked for an "opt-in" option for parents who were interested in entering their students into a version of the sex education curriculum that would be more comprehensive that the one being proposed by the district.

Later in the meeting, 11 residents spoke in opposition of changes to bylaws for the School Health Advisory Council. Among the SHAC's responsibilities, the council oversaw some of the process to change the sex education curriculum.

Community members claimed that the bylaws violate requirements to “uphold Texas law as written” to limit human sexuality instructionto those practices that only emphasize abstinence, and that SHAC members did not represent the current values of all district residents.

According to the district’s legal council, the bylaws do read as required and do not need to address every state requirement directly. Trustees approved the bylaws unanimously.