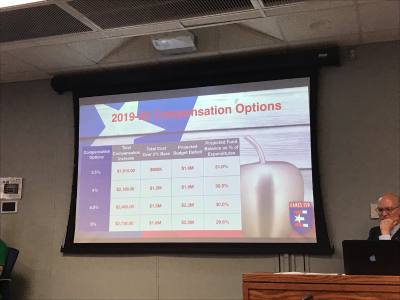 Eanes ISD approved a 4.5% salary increase for its teachers during a June 18, regular board meeting.

Eanes ISD will not be able to provide teacher raises on par with those described by Lt. Gov. Dan Patrick when discussing House Bill 3, new legislation passed in the Texas Legislature this year. This is according to Chris Scott, EISD’s executive director for business services.

In a memorandum to EISD Superintendent Tom Leonard, Scott said that while Patrick estimated an average teacher pay increase of about $4,000, Central Texas districts have calculated significantly lower raises, from a few hundred dollars to around $3,000.

“Unfortunately, Eanes ISD is at the low end of that scale,” the memo states. “We are continuing to refine these calculations, but we don’t expect that our relative position to change significantly.”

Leonard explained that public information regarding HB 3 excluded a few important details. For example, under the bill, raises would only be granted to teachers with six years of experience or more.

"We feel that all of our teachers deserve an equal raise," Leonard said.

Despite a possible shortfall, members of the board agreed upon the critical importance of competition from neighboring districts, such as Austin ISD, which passed a 7% salary increase for teachers with more than five years experience.

EISD received $1.9 million through HB 3, which is about four times less than what Lake Travis ISD was granted, according to Leonard.

The board decided on a 4.5% compensation increase for teachers during the June 18 regular board meeting. Though the compensation differs from the rhetoric surrounding HB 3, it still meets the requirements of the bill.

She asked the board to reconsider a 5% raise for teachers.

EISD reserves the right to revisit this approval. The board plans to further improve its budget calculations and provide better clarity regarding financial projections for future school years.
SHARE THIS STORY

The experienced stylists at Brett Thomas Studio at Westlake offer a variety of hair services including cut, color and chemical treatments.