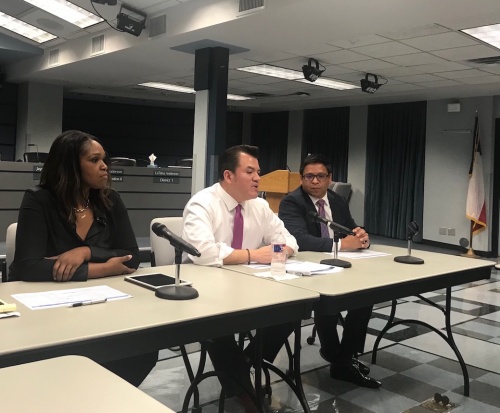 Superintendent Paul Cruz and other Austin ISD staff speak to reporters about the district's budget and possible school consolidations.

Into the early morning of Feb. 12, Austin ISD trustees discussed what a timeline to create a plan to more effectively utilize district campuses would look like. The plan could outline new programing options at specific campuses and boundary changes, as well as school closure and consolidation options.

According to the timeline presented at the board workshop, the board could vote to advance plan development at its Feb. 25 meeting, and could take action related to schools impacted by closures or programing changes at a meeting June 17.

However, many trustees expressed concerns that a June deadline may not be realistic and more time was needed before they could vote to advance a plan later in February.

Trustees Cindy Anderson, Jayme Mathias, Ann Teich, Amber Elenz and Kristin Ashy each felt the presented timeline would not allow for proper analysis of options and community engagements. Trustees also wanted a plan to assure that transparency and equity in the process, as well as community engagement, would be priorities.

Trustees Yasmin Wagner, however, said she feels the board should be “confronting the very difficult decisions we have to make” instead of “perpetuating” conversations about the process.

“We have done copious amounts of work around equity,” she said. “What are we going to do this time that is going to yield different results and information that we haven’t already collected in the past? These are things we have looked at for years now.”

While acknowledging the timeline presented was an aggressive one, Wagner said the board should move forward if district staff and groups “have the resources and the time available.”

District leadership presented in December the idea of closing and consolidation of schools due to shortfalls in the district budget. Consolidation as a means to save costs and better utilize campus space was also recommended by district’s budget stabilization taskforce in January.

“The opportunity here is around creating these 21st-century learning spaces for all of our students, having as many students as we can in fully modernized, hi-tech facilities,” Superintendent Paul Cruz said at the meeting. “It’s not about closing. It’s not about consolidation. Could that be an effect of what we’re trying to do? Yes, but the intent is looking at this information collectively. We want [AISD] to be better and stronger than we are today.”

After echoing some of the benefits outlined by Cruz, Mathias said he does not want the district to hide from the realities of future school closures by using euphemisms.

While accompanying documents for the Feb. 11 meeting stated that criteria for consolidation could be based on a process outlined in the district’s 2017 Facilities Master Plan, Operations Officer Matias Segura said the board would ultimately be the group to set “guiding principals” and criteria for the process.

The board Feb. 11 also discussed the current state and timeline for approving the 2019-20 fiscal year budget.

According to a presentation by Nicole Conley Johnson, AISD chief of business and operations, the 2019-20 budget could have a potential shortfall of $12 million, compared to the almost $30 million budgeted shortfall for fiscal year 2018-19.

Her 2019-20 projection also included $35 million in relief for the district in the form of state school finance reform.

“We’ve done some estimating and we think [state education financing] would be more advantageous under new laws [out of the current legislative session],” Johnson said. “I don’t want to assume we don’t get anything from the legislature because that’s far from the truth. It’s not going to cure us but it will get us half-way there.”

She also said that the $30 million budgeted shortfall for fiscal year 2018-19 will likely end up being closer to a $20 million deficit by the end of the fiscal year.

According to the presentation, the preliminary budget will be released and presented in April, and the final budget will be up for board approval in June. The board will set the tax rate in August.