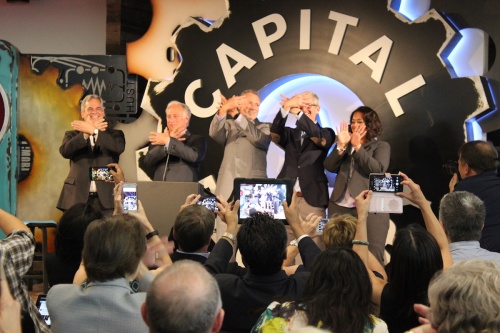 ACC is one of more than 30 community college systems across the country that will be offering Apple’s App Development with Swift curriculum. Swift is the coding language developed by Apple and designed to work with its products. The aim of the program is to provide education and training that will help community college students access middle-skill job opportunities in the tech sector.

Austin Mayor Steve Adler introduced ACC President and CEO Richard Rhodes at the news conference, telling the crowd that the college is creating economic opportunity for everyone in Austin.

This partnership, however, will allow Central Texas residents to obtain certificates and two-year degrees that will help them break into the information economy at home, he said.

Rhodes oversees more than 76,000 students annually as president of the ACC system.

“Their dreams are to get great jobs, to provide for their families,” he said, before introducing Keelee Moseley, an ACC graduate who studied programming while enrolled at the school.

“It has changed my life,” Moseley said. She is the first person in her family to graduate from college and now works for ACC’s IT department.

“For many people, community college is the gateway to opportunity,” he said, which is why Apple developed this curriculum.

Since the company’s App Store launched in 2008, U.S. developers have earned more than $16 billion from app sales, Cook said.

This year marks Apple’s 25th anniversary in Austin. Since opening in 1992 with 100 employees, Apple’s Northwest Austin office has grown into the company’s second largest campus in the world, with more than 6,000 employees.