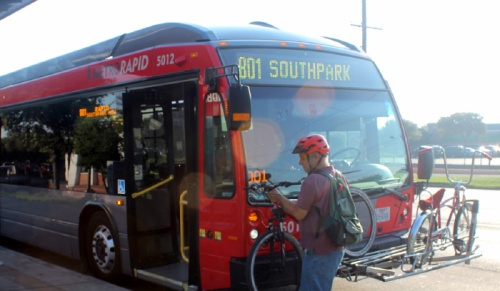 Capital Metro announced its vision for Project Connect–the regional transit plan that has been in the works since 2013–will include autonomous vehicles, more connected bus routes and a fully electric fleet.

“We want to set the vision for what the world can look like in 2030, 2040, 2050 to do the right investments,” he said. “The first step is how do we actually connect vehicles together, how can they all be electric, we’re dealing with environmental aspects, better infrastructure.”

One of the newest features of Project Connect will be autonomous rapid transit, or ART. Clarke said the agency still needs to discuss what ART might look like for Project Connect as well as study light rail and true bus-rapid transit because MetroRapid buses do not fully operate in dedicated lanes.

“We need to do this in stages if [the plan] comes together,” he said. “Autonomous vehicles may be further out. That’s why this is a vision plan.”

Capital Metro officials have briefly tested an autonomous shuttle in downtown Austin but are waiting on federal permits and vehicles that meet Americans with Disabilities Act standards before rolling out a pilot program.

At a media event Sept. 14, officials announced the key to moving large numbers of commuters without disrupting traffic will come down to having dedicated lanes for public transit vehicles.

“Regardless of the mode and regardless of the plan we need dedicated pathways because unless we get high-capacity transit out from the stop lights and the cars and if it’s not moving faster than the traffic then nobody is going to get out of their car and get on [transit],” Mayor Steve Adler said.

Because Capital Metro cannot acquire right of way, the agency will need to have further discussions with the city over the next 18 months on how to achieve dedicated pathways for transit, Adler said.

“The key here again is to work with the community on individual corridors and see which solutions work the best,” Clarke said.

How the region will pay for these plans is also a future discussion that would happen after a decision is made on what transit options the region needs, Adler said. One preliminary idea is using funds from a possible November 2020 bond.

“I don’t know how we’re going to pay for a project but now is not the time to have that conversation,” he said. “First let’s decide what we want, and then we can worry about how to pay for it.”

Clarke echoed this sentiment, even though Capital Metro announced this spring the possibility of seeking a bond in November 2020 to gain the local funding match for any potential federal funds.

Part of the Project Connect includes additional MetroRapid routes with transit priority that would serve the Travis County Expo Center; offer an east/west connection in downtown Austin along Fifth and Cesar Chavez streets; run along Pleasant Valley Drive in East Austin; and serve areas from The Domain to the Austin Community College Pinnacle campus.

The plan also identifies one opportunity to expand regional rail with adding the long-discussed Green Line MetroRail route to Manor.

Project Connect is a regional transit plan that has been in the works since February 2013. Capital Metro and its partners, which include the city of Austin, divided the region into corridors emanating out from downtown Austin and focused on the corridors with the greatest need first.

Plans for the North Corridor that extends to communities in Williamson County proposed new bus routes and Park & Rides. In 2017, Round Rock launched bus service throughout the city and connecting to a Park & Ride in North Austin, and Georgetown launched its bus service, both with assistance from Capital Metro.

An effort focused on the Central Corridor resulted in the failed 2014 rail bond, and planners briefly hit pause.

In 2016, planning efforts resumed on Project Connect to analyze priority corridors for transit and which modes would be most appropriate for different areas in the region. The agency has abandoned its initial corridors identified in 2013 in favor of a more regionally connected approach, according to officials.

In March, Capital Metro unveiled a draft map for Project Connect that outlines 11 future transit corridors in a plan that could go to voters in November 2020. The vision announced Oct. 1 includes these corridors with some modes identified, such as additional MetroRapid routes, ART and a new commuter rail line.

Clarke said Austin shouldn't hide behind the fact the city has had two failed rail bonds.

“I kind of view that as an opportunity,” he said. “We have a blank slate and have an opportunity to do things that other cities haven't.”