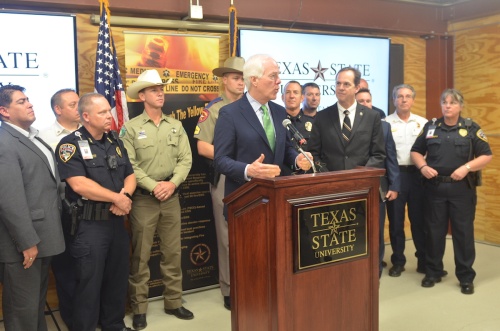 The U.S. Department of Justice has awarded Texas State University $5.4 million to use on improving rapid response to active-shooter events.

The money will go to the university's Advanced Law Enforcement Rapid Response Training, or (ALERRT) Center, which was created in 2002 as a partnership between Texas State University, the San Marcos Police Department and the Hays County sheriff’s office to address the need for active-shooter response training for first responders.

"This outstanding award from the Department of Justice not only shows how important this level of training is for law enforcement, it also illustrates the high degree of confidence this federal agency has for the ALERRT Center and its ability to train emergency personnel across the country,” said Texas State President Denise Trauth in a news release Tuesday.

The grant was announced by U.S. Attorney General Jeff Sessions on Monday during remarks at the International Association of Chiefs of Police Conference General Assembly, according to the release.

“In the face of tragedy and chaos—time and time again—we’ve seen first responders act quickly and decisively to restore order and safety,” Cornyn said in a statement. “It is critical that we continue to give law enforcement, fire, and EMS officials every available resource to keep our communities safe, and this will go a long way in training first responders across the nation to respond to active shooter situations.”

Last year, Cornyn visited Texas State's ALERRT Center to receive a briefing on the program and observe a demonstration of its training.

Since 2002, Texas State's ALERRT Center has been awarded more than $56 million in state and federal grant funding, and has trained more than 105,000 police officers nationwide in dynamic, force-on-force scenario-based training, according to the center's website.

In 2013, the FBI named ALERRT their standard for active shooter response training.