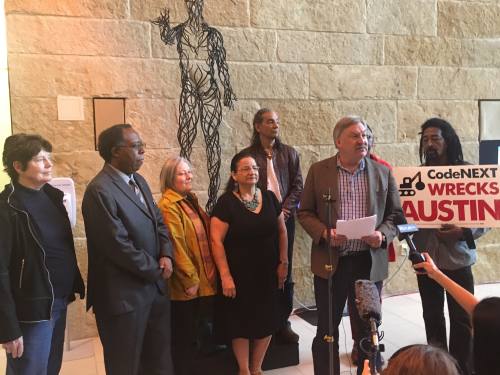 If there are more than 20,000 valid signatures on the petition, City Council will be forced to either pass the ordinance as written, or call a local election to let the voters decide. The group—a political action committee called Unconventional Austin—took advantage of a tool called a “citizen-initiated ordinance,” which gives eligible voters in a city the opportunity to pass certain laws regardless of City Council consent.

Such attempts by citizens have become common in recent years. Last fall, Austin voters faced two such questions—Prop J, which asked if citizens should get to vote on comprehensive changes to the land development code, and Prop K, which asked if the city should undergo a forensic audit of its expenses. Voters rejected both. If the convention center question lands on this fall’s ballot, it would accompany a similar question on giving public land away for stadium and entertainment uses.

One reason it has become so common could be because it is significantly easier to pull this off in Austin than any other major Texas city, according to a Community Impact Newspaper analysis of municipal laws throughout the state.

While Austin currently requires petition support from only 3% of its electorate, the larger cities, such as Houston, Dallas and San Antonio, and smaller cities such as El Paso and Fort Worth, require a much greater effort by citizens who want to get their ordinance passed.

In Austin, a group of citizens can get together, draw up a legally sufficient ordinance they want passed, attach it to a petition sheet and begin canvassing support from eligible Austin voters. By law, the petition needs the lesser of 20,000 signatures or a number equal to 5% of the voters registered in the last local election, to be valid.

With 657,069 voters registered in Austin’s last election, 20,000 signatures is the threshold, which equals approximately 3% of the city’s electorate.

Signatures are valid for 180 days, so petitioners essentially have 6 months to collect support for their cause. Once they feel the 20,000 threshold has been met, the group submits the petition to the city clerk for validation. Although the clerk has no mandated time limit for validation, the city says a petition with 20,000 signatures takes between 12-15 days to validate. After validation, City Council has 10 days to either adopt the ordinance as written or call an election to let the voters decide at the nearest available election date.

Before a petition can even go out for signatures, Houston’s city code requires the petitioners to file the document with the city secretary for validation.

Once approved, petitioners have 30 days to collect signatures equal to 15% of votes cast in the most recent mayoral election. Houston’s last mayoral election was 2015, in which 268,872 Houstonians voted, according to Harris County voting records.

Petitioners would need at least 40,331 signatures from eligible voters in order to get an ordinance in front of City Council. Similar to Austin, once the city secretary validates the petition, City Council has 10 days to pass the ordinance or call an election to let voters decide.

Like Houston, petitioners have to submit an intent to petition, with the date and ordinance language attached, according to Dallas City Secretary Bilierae Johnson.

After the city secretary receives the documents, a 60-day countdown begins for the petitioners to gather signatures equal to 10% of the registered voters in the most recent municipal election. Dallas held a City Council election on June 8. Today, there are 657,504 registered voters in Dallas proper, according to election offices in Dallas, Collin and Denton counties, which each carry a piece of the city boundary.

To reach the 10 percent threshold, petitioners need to acquire 65,751 signatures to get their ordinance in front of City Council, which has 20 days to adopt the ordinance or call an election.

Johnson said the citizen-initiated ordinance process was used to get City Council to pass an ordinance requiring businesses to provide paid sick leave to employees.

In San Antonio, petitioners need only to file the petition to create a new ordinance when they feel they have reached the signature threshold.

The city code requires the petition to include signatures equal to 10% of the number of registered voters in the most recent local election. San Antonio just held a mayoral run-off election on June 8, for which there were 784,148 registered voters, according to the Bexar County Elections Department.

To reach the 10% threshold, petitioners today would need 78,415 signatures to force San Antonio City Council to vote on their desired ordinance.

San Antonio’s City Clerk has 20 days to validate the signatures. Once validated, City Council has 60 days to pass the ordinance or call a vote.

For Fort Worth’s recent May 4 general election, 434,082 people were registered to vote in the city, according to the Tarrant County Election Department, which means 86,817 signatures are needed for petitioners to get their proposed ordinance in front of City Council for a vote.

Once filed, the City Clerk has 10 days to verify the signatures and present the ordinance to City Council. City Council then has 30 days to either approve it as written or leave it up to the voters in the soonest available election.

It could be said that even in El Paso, which has a little more than half of the registered voters that Austin has, it is more difficult to force a vote on a petitioned ordinance.

An ordinance by citizen initiative requires a petition of support with signatures of at least 5% of the voters registered in the last local election. During El Paso’s May 4 general election, 388,260 people were registered to vote in the city, according to the El Paso County Elections Department.

This means 19,413 signatures are needed to put an ordinance in front of City Council. Although that number is 587 signatures less than Austin, there is an extra step in El Paso.

City Council has 30 days after receipt and validation of the petition to place it on its agenda. If City Council chooses to not pass the ordinance as written, petitioners must go back out and again collect at least 19,413 signatures in order to put the ordinance to a citywide vote.

Taylor Girtman contributed to reporting on this story.