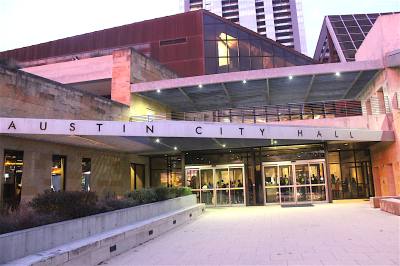 In November, voters in Austin approved a $925 million bond to help the city tackle a range of projects––from building more affordable housing to funding flood mitigation projects to rehabilitating some of the city’s libraries.

The aging Dougherty Arts Center, originally built as a naval reserve facility in 1947, received $25 million of those bond funds to construct a new facility.

A 2010 needs assessment found the current building, located at 1110 Barton Springs Road, is “beyond repair,” according to the Austin Parks and Recreation Department. At Austin City Council’s May 9 meeting, Mayor Steve Adler described the building as “literally falling apart.”

City Council on May 9 approved the relocation of the center to Butler Shores on Lady Bird Lake by an 8-2 vote with District 6 Council Member Jimmy Flannigan and District 3 Council Member Sabino "Pio" Renteria voting against. District 4 Council Member Greg Casar was off the dais.

The new facility will replace two Austin ISD softball fields on a tract of parkland directly behind the Zach Theatre fronting Toomey Road.

District 5 Council Member Ann Kitchen represents the area where the DAC would be rebuilt. At the meeting, Kitchen introduced an amendment that would require the parks and recreation department to come back to council after the schematic design phase and before beginning construction.

When staff returns to council at that time, Kitchen said the city should be ready to evaluate potential options for construction at the site and address concerns raised by neighborhood residents about traffic and parking.

“As we get into the design phase, we have the opportunity to dig deeper to see what can be done to address concerns about the impact on Toomey Road,” Kitchen said.

Flannigan said he “was not satisfied with how the process has gone” and had a number of issues with the way public engagement was conducted. Renteria, meanwhile, said he was disappointed the city did not wait to consider AISD schools that may be closing.

The school district is in the process of reevaluating its facilities and will likely close some of its schools by 2020. Renteria specifically mentioned Zavala Elementary School in East Austin as a school likely closing that could have been considered.

“I think we should wait and postpone this until after August,” Renteria said.

Canje will be the sixth Austin restaurant for Emmer & Rye Hospitality Group.

The seven-story office project and 32-story residential tower are expected to open off of Red River Street in 2023.

Austin Board of Realtors data shows a new record for home prices in Austin's core.

The first round of funding will support programs initially established with Coronavirus Relief Funds.