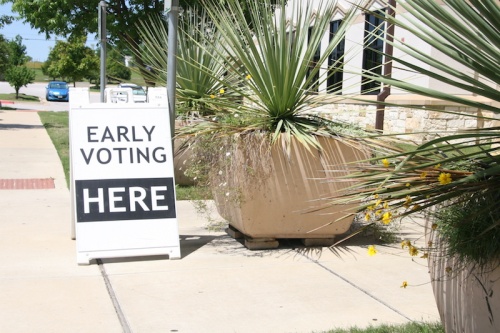 Early voting results are showing the majority of favors in support of Travis County's $185 million bond.

“As Travis County elected officials, it is our responsibility to make certain county government is fulfilling its current responsibilities while sensibly planning and addressing the demands of growth, public safety, and the future needs of the county," County Judge Sarah Eckhardt said in a statement Tuesday night. "Now, with the voters’ approval and input, the Travis County Commissioners Court can do exactly that. We are eager to get started on the much-needed projects that will come as a result of these bond packages.”

The Travis County bond is continuing to garner strong support from voters as reflected in the first round of counted Election Day votes.

Early voting numbers released Tuesday night at 7 p.m. show the majority of voters are in favor of both Travis County bond propositions.

Polls indicate 70.29 percent of voters support Proposition A and 69.57 percent are in favor of Proposition B. Total votes counted include 38,446 for the former and 38,453 for the latter.

County officials were pleased with voter turnout and early voting numbers, commenting on the strong support from the community to approve this bond.

"If early voting numbers hold we are very excited to get to work immediately on these projects to bring safer roads and more parks to Travis County residents," County Judge Sarah Eckhardt said. "If we win this thing we will start in two days at a special voting session Thursday to get projects underway, on time and under budget."

"Early voting numbers show a really strong showing and I love the way this democratic process works," Commissioner Margaret Gomez said. "These projects will address future growth, public safety, and the [maintain] the future of this community. I am truly happy with voters choices. "

The $185 million bond will address road and park improvements throughout the county, with a vast majority of the projects located east of I-35. That total does not include $94.9 million for locally funded county projects that do not require voter approval.

The bond was divided by two propositions on the ballot. Polls closed at 7 p.m.

Proposition B sets aside $91.5 for park improvements, including a sports complex in Bee Creek and improvements to the Northeast Metropolitan Park and the Onion Creek Greenway.

If the propositions are approved, taxpayers will see a total annual property tax increase of $36.34, which accounts for both the bond and annual appropriations.

According to the county, the bond will be funded over five years and residents will incur its property tax rate increase starting in fiscal year 2018-19.