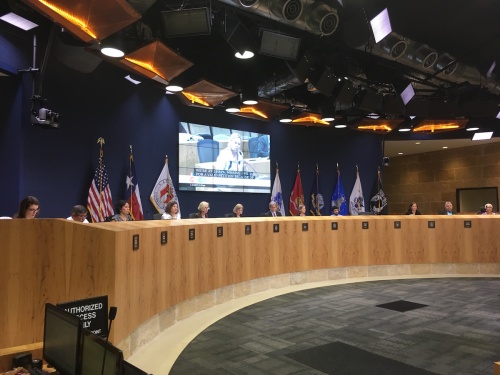 District 8 Council Member Ellen Troxclair will bring a resolution to council that seeks to establish affordability standards for Austin's water and garbage utilities.

District 8 Council Member Ellen Troxclair cited the city's affordability crisis as a reason why she opposed the city's legal battle against the constitutionality of the state's "sanctuary city" bill.

The Texas Legislature last week passed Senate Bill 4, sparking numerous protests, sit-ins and calls for resistance from some residents and city officials from across the state. The bill enables law enforcement officials to inquire about the immigration status of any individual and threatens to punish cities and government officials who fail to comply with the law.

On Thursday, one week after Texas Attorney General Ken Paxton filed a lawsuit against the city of Austin for its immigration policies, Austin City Council voted 10-1 to take the State of Texas to court to challenge the constitutionality of the new law. Troxclair voted against the resolution because she said she was, among other things, influenced by the city’s affordability crisis.

“In the midst of our affordability crisis, [taking the state to court] is going to cost the city an unspecified amount of money to do something that I’ve had federal immigration officials tell me is making our city less safe,” Troxclair said.


“In the midst of our affordability crisis, [taking the state to court] is going to cost the city an unspecified amount of money to do something that I’ve had federal immigration officials tell me is making our city less safe.”

Although she claims she was encouraged by some to step off the dais or abstain from the vote, Troxclair said she felt “forced” to respond to the issue.

“I have a specific responsibility to speak up on behalf of the people who hold a different but equally important view of the City of Austin being both welcoming and lawful,” Troxclair said.

Mayor Steve Adler has repeatedly said that local law enforcement officials from Austin and across the state have testified that SB 4 makes communities less safe by breaking down the police’s relationship with the community. But Troxclair said Immigration and Customs Enforcement officials “unequivocally” agreed that resisting the new state law instead threatens the safety of communities.

According to District 4 Council Member Greg Casar, a vocal opponent of the state bill, said the city and county of El Paso passed a similar resolution earlier this week, and that San Antonio and Dallas will be briefed next week.

“We are part of a broad coalition of communities that want to stop this bill before it gets implemented,” Casar said.