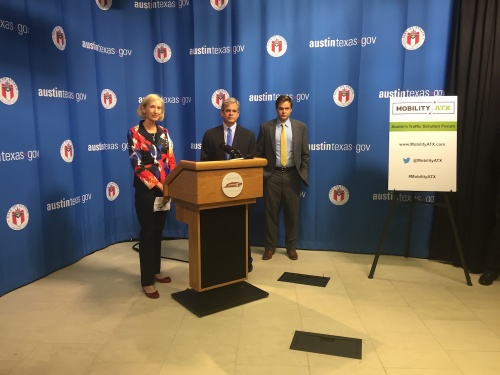 The report shows the five most popular ideas on how to improve Austin's traffic:

Mayor Steve Adler said a bond could be possible to fully fund the Bicycle Master Plan, however he did not say whether or not he would support the idea.

"It is the full intention of this council to move forward on mobility solutions and, I think, as people said, it's going to require a lot of different things," Adler said. "We don't have a mobility plan that works without a strong, integrated multi-method transportation system, and that's going to include a bicycle network. It's also going to include dedicated lanes for I-35 so we have transit that can move more rapidly than cars."

"We have a transportation mobility crisis in this city. We had a bond election that was defeated last November but the problem didn't go away—it's gotten worse," Adler said. "The two biggest challenges we have in this community, mobility and affordability, are linked together, and we don't solve affordability in this city without solving [transportation] as well. It's that important."

Thomas Visco, Glasshouse Policy's director, said the report does not entirely reflect the priorities of the entire Austin community and instead only represents views from those who decided to engage in the process. He encouraged anyone who did not have their ideas included in the Mobility ATX conversation to bring those ideas forward.

"I think this report will serve as a guiding document for council on what public policy priorities look like for a swath of the public," Visco said.
SHARE THIS STORY