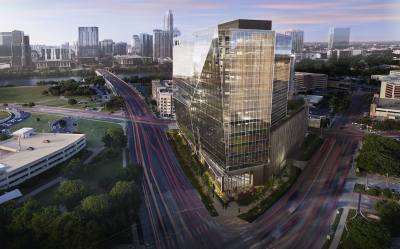 The RiverSouth building will stand at 15 stories and 350,000 square feet.

Lane closures at the intersection of Barton Springs Road and South First Street will begin Saturday, May 18, and last for approximately three months as a result of the forthcoming RiverSouth development, according to a May 15 memo from Austin Transportation Director Robert Spillar.

The closure on Barton Springs Road will include the sidewalks, bicycle lanes and one of the driveways at One Texas Center.

Signs will indicate detours for cyclists and pedestrians as well as those traveling to and from OTC.

RiverSouth is a 15-story mixed-use building planned for 401 S. First St., on the lot previously occupied by a Hooters restaurant. Set to open in early 2021, the development will include ground-floor restaurants and retail space along with 37,000 square feet of office space.

The first phase of the redevelopment requires utility mitigation, which includes burying Austin Energy lines beneath the pavement on South First Street and Barton Springs Road, per the memo.

"Although the Austin Transportation Department has worked with the contractor to mitigate the disruptions, the lane closures required for the utility work will have a significant impact on the transportation network due to the location of the site," Spillar wrote.
SHARE THIS STORY