CDC releases results of scooter study, finds nearly half of injuries are severe 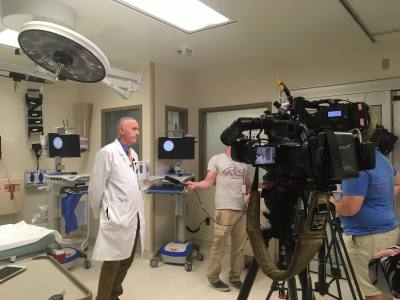 A first-of-its-kind epidemiological study conducted by Austin Public Health and the Centers for Disease Control and Prevention found that, of those injured while riding dockless scooters in Austin, nearly half suffered severe injuries and 15% had evidence suggestive of a traumatic brain injury.

The results of the study were announced at a May 2 news conference.

“I think this data will help inform future thinking,” said Robert Spillar, director of the city’s transportation department, said at the event, adding that the study results could influence policies and transit planning. “Clearly [these devices] are part of our mobility future.”

Syndromic surveillance is used for early detection of outbreaks, according to the CDC.

Of the 271 potential cases identified during the study period, 192 were confirmed as having been injured by a dockless scooter. Researchers interviewed 125 of individuals and also reviewed medical charts and EMS reports.

The median age of injured riders was 29 years old. Nearly two-thirds identified as white and 60 percent of riders lived in Austin at the time of their injury.

Almost half of the injuries occurred downtown or on the University of Texas at Austin campus, where ridership is most concentrated.

Among the injured riders, nearly half—80 of 190—sustained a severe injury, which included bone fractures; nerve, tendon or ligament injuries; spending more than 48 hours in the hospital; severe bleeding; or sustained organ damage.

Additionally, nearly half suffered head injuries, the study found. Fewer than 1% of riders wore a helmet at the time of injury.

One scooter-related fatality has been reported in the city of Austin, although it occurred after the study period had ended. At 1 a.m. on Feb. 2, a 21-year-old rider traveling the wrong way on the I-35 frontage road was hit by a car, according to police reports.

Researchers concluded that the study “likely underestimates the prevalence of e-scooter related injuries” because it only considered injured riders who had sought medical care at an area emergency department.

On the other hand, the riders who were studied “are believed to experience more severe injuries compared with injured e-scooter riders whose injuries did not require care from a hospital emergency department or EMS,” per the study.

Dockless vehicles, including electric scooters, first arrived in Austin in April 2018. Since then, their use has skyrocketed, even as the city of Austin has paused issuing licenses to new operators and council members continue to fine-tune regulations around these transportation modes.

In March, largely thanks to the South By Southwest Conference, the city saw a new monthly record for dockless mobility trips: 740,476, 93% of which were on scooters. Dockless bicycles accounted for 51,205 trips.

At the Capitol, state lawmakers are considering regulations for scooters, including prohibiting scooter users from riding on sidewalks and imposing an age minimum of 16 years. Senate Bill 549 passed May 1. Its counterpart, House Bill 4499, was referred to the Transportation Committee March 26.

Meanwhile, Austin City Council was due to vote on enforceable regulations for dockless mobility—including creating “dismount zones” downtown where scooters would not be allowed and requiring riders to obey all traffic laws, such as avoiding use of mobile devices—in late March.

However, council members and city staff decided they needed more time to workshop the ordinance with the community.

A new vote is scheduled for May 23.
SHARE THIS STORY