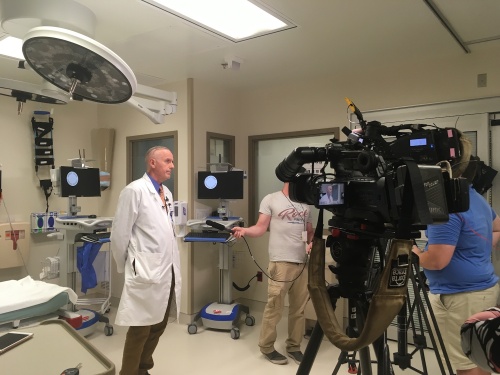 In April, Austin City Council authorized a dockless mobility operator's license, allowing for electric scooter companies such as Bird and Lime to operate in the city legally.

The following month, the city adopted emergency administrative rules governing dockless mobility technology, including scooters and bikes, through Sept. 10. This emergency was declared in the name of public safety.

Today, there are at least 1,021 dockless scooters and 1,100 dockless bicycles licensed to operate in a specific downtown zone roughly bordered by MoPac, Oltorf Street, Chicon Street and Martin Luther King Boulevard. Additional licenses have been granted in areas outside of this zone.

In the last couple of weeks, patients have arrived at Dell Seton Medical Center "pretty much on a daily basis" with a variety of injuries sustained on scooters, Dell Seton's ER Medical Director Christopher Ziebell said at a press conference on Friday.

Most of those patients have sustained minor injuries, such as broken bones, scrapes, bruises and sprains that prompt a visit to the ER but do not require hospitalization, Ziebell said.

However, at least five patients have been hospitalized, three with severe head trauma, caused by scooter crashes, according to Robert Buchanan, chief of neurosurgery at Dell Seton Medical Center.

"The possibility of life-changing, or life-ending, injuries are tremendous," Buchanan said at the press conference, due to the force of the scooter, which can reach speeds of 15 miles per hour.

Buchanan said the scooters may also pose a risk to others caught in the scooter rider's path, whether on sidewalks, in the bike lane or on the road.

He encouraged riders and Austin residents to complete the city's Dockless Mobility Community Survey, which is open through Aug. 31, to help improve the administrative rules in place.

"People just really need to recognize that these are motor vehicles, and they need to be treated with that kind of respect," Ziebell said.