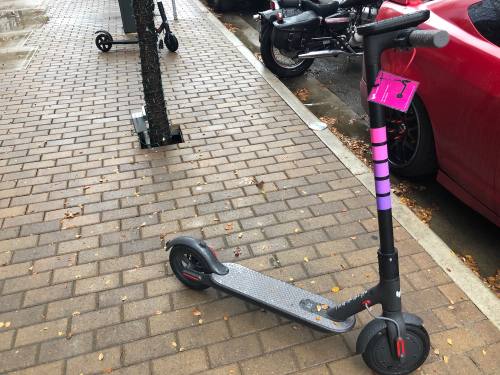 A Lyft scooter rests on an Austin sidewalk.

In a first-of-its-kind mission the Centers for Disease Control and Prevention will conduct an epidemiology study on scooter crashes and injuries in Austin as the city continues to iron out policies and regulations for the new private transportation service.

Austin Transportation Director Rob Spillar said it is the first CDC study on dockless scooters in the United States. The scope will include the 37 EMS calls and 68 scooter injuries that occurred Sept. 5-Nov. 4 this year. The CDC will look at crash causes and severity and search for ways to limit such incidents moving forward.

“We think this will be a very thoughtful analysis of the actual crashes that are happening,” Spillar said to Austin City Council’s Mobility Committee on Dec. 6. “Not only to … quantify what’s happening but also to try and find out what the similarities are between the different crashes so we can better understand how to address those.”

Through data analysis and evaluation of risk factors, epidemiological studies are often used to help shape policy decisions around public health. Phil Huang, medical director with Austin Public Health, said the CDC most recently conducted an epidemiological study in Austin on tick-borne relapsing fevers. He said the team of three epidemic intelligence officers would be working to get results on the scooters over the next few weeks.

The study is part of a larger effort to nail down policy and regulation of the electric scooters as they continue to rise as a popular transportation mode throughout the city. Since the scooters began populating Austin streets and sidewalks in the summer, the two-wheeled vehicles have stirred controversy among locals.

During the Dec. 6 mobility committee meeting council members talked about the need for regulations around riding on sidewalks, speed limits, scooter and brake design, and fleet caps. There are 11,001 scooters currently deployed throughout Austin’s streets. Since there are still several areas of the city not served by scooters, Spillar told the committee Dec. 6 the city’s cap on the vehicles would certainly be higher than 11,001.

Mayor Pro Tem Kathie Tovo emphasized the need to figure out the scooters on sidewalks situation and how best to inform the public of upcoming regulations. There are currently six areas of the city where scooters are not allowed on the sidewalks—known as “dismount zones”—including Congress Avenue and Sixth Street; however, few people know that, she said.

Council Member Ann Kitchen called enforcement a “critical” component of scooter regulations. Council Member Alison Alter said she was concerned with how scooter rules would be enforced and how the city could pay for extra enforcement. Council Member Jimmy Flannigan said he thought it weird there were no set standards for scooter designs, saying he’s seen a variety of braking mechanisms and tire sizes among scooters from the same company.

Last week in the first major move of city scooter regulation, Austin removed 1,000 Lime scooters from the streets after the company violated the city's fleet limit.