The Austin Police Department graduated its first class of cadets in more than a year Jan. 28, bolstering the force of a department that remains understaffed while reaching a key milestone in ongoing efforts to rethink public safety in Austin.

APD's 144th cadet class will bring 66 new officers onto city streets following the January commencement ceremony. Police Chief Joseph Chacon said he is excited to see what the department's newest members bring to Austin as well as the future of the cadet academy, while stating that a pressing need for more officers still remains.

"This is really a start, but we’ve got more work to do and more people to recruit to become police officers and to get through the academy," Chacon said before the ceremony.

The completion of the 144th class comes amid a period of heightened scrutiny on APD's culture and training practices, partially brought on by the city's continuing "Reimagining Public Safety" push that began in 2020. An extended pause on training at APD was also prompted by a series of reports into culture issues at the academy, and the 144th class marks the first infusion of new officers to the department force since October 2020.

Ahead of the Jan. 28 ceremony at Great Hills Baptist Church, Chacon said the cadet class—now officers—will immediately begin contributing to APD patrols. The completed program is also expected to serve as a stepping stone on the department's path to more regular training sessions following the pause of the past two years.

City Council budgeted several more academy classes for the current fiscal year, and a 145th class could begin as soon as March. 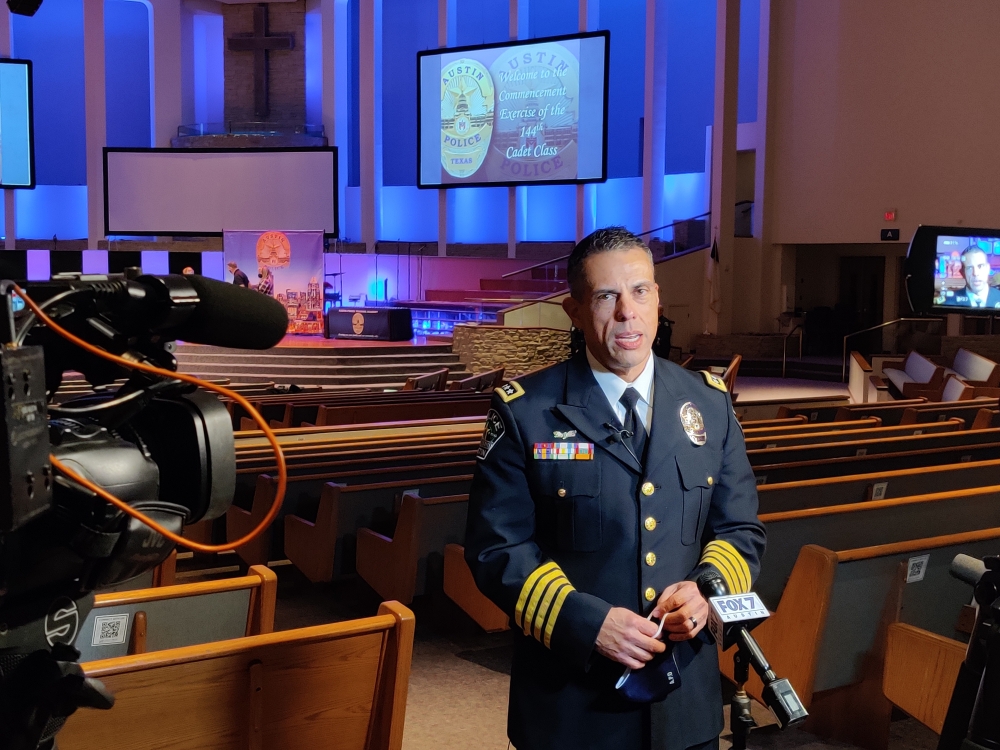 "What we have to do is two things: The first is slow attrition, which I feel like we’re doing, and the other is I’ve got to build greater training capacity," Chacon said. "I want to have multiple classes that are going at the same time so that we can make an impact overall on our number of vacancies.”

Among the training changes implemented since the 143rd class graduated in 2020 are a shift away from a "warrior mentality," new adult-focused teaching methods and increased time spent in the Austin community. Academy officials and citizens involved in the training process have said the 144th class does not yet represent a complete refresh of APD training, but that the eight-month process was productive and should set future classes up for further change.
Austin Austin Police Department Joseph Chacon
SHARE THIS STORY