The locations in question include Huston-Tillotson University and Yellow Jacket Stadium on the city's east side and a collection of 20 Allandale homes comprising the Austin Air-Conditioned Village Historic District to the west.

Nominations for all three sites' additions to the National Register of Historic Places were unanimously backed by the Texas Historical Commission's State Board of Review during a Sept. 18 meeting. Gregory Smith, the THC's federal programs coordinator, highlighted the slate of nominations as a strong and varied group of historically relevant sites.

"They're all highly significant for their own reasons," Smith said.

People familiar with the three nominated sites said they each represent important touchstones in Austin's history. The nominations for the East Austin properties detailed their statewide significance in relation to the city's past segregationalist and racist policies and as markers for African American education in Austin, while the Allandale district was cited by community members as a national example of real-world experimentation in the fields of engineering and architecture.

Following the state review board's action, the historic commission and site applicants have several months to revise the draft nominations. Information on the locations' historic value will then be submitted to the National Park Service for addition to the National Register.

Smith said opposition from a majority of present-day air-conditioned village residents to its nomination means it is "unlikely" the district will ever be formally registered. However, the state commission's review will continue, and the site could still end up being designated elsewhere in National Park Service logs.

The locations are among several throughout Austin this year to either be added to the register or nominated for listing, following the Willie Wells House off South Congress Avenue, the Travis Heights-Fairview Park Historic District and downtown's Third Street Railroad Trestle. 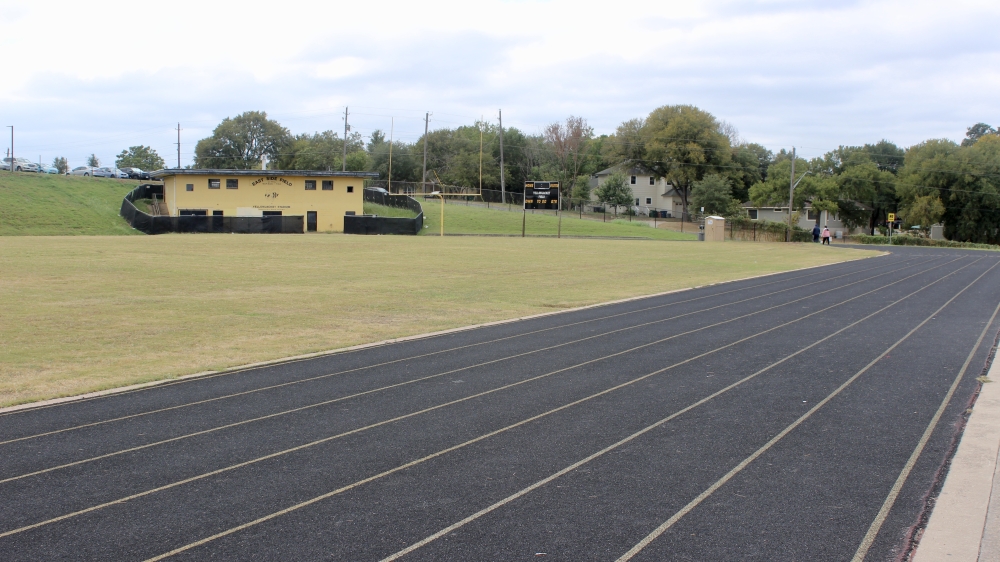 The site's grass field, running track, metal bleachers and other facilities do not appear too dissimilar from those found at many high schools today. However, the property was selected for National Register consideration due to the prominence of both the stadium and now-demolished Anderson High School in Austin's segregated public school system of the mid-1900s.

The site's nomination was prepared by Smith and Rebekah Dobrasko in coordination with Anderson's alumni association. According to their presentation, the stadium was notable during its years in operation for being one of the few throughout all of Texas that was exclusively used by its all-Black high school.

The stadium's heyday came at a time when most segregated campuses statewide did not have quality facilities for their students, student-athletes, band musicians and other club members to use, forcing most of them to share space with nearby white-only schools. That arrangement also led most Black schools in Texas to hold games or events on Wednesdays or Thursdays, traditionally off days, while the white schools' facilities remained reserved for their students on Friday nights or weekends, researchers and alumni said.

Anderson, however, had its own stadium and held its main events there on Fridays. Major games and exhibitions centered around Austin's Black community led the stadium to be recognized throughout the city and state.

"Anderson Stadium continues to evoke the feeling of a special, significant place, especially for the larger African American community and Anderson alumni," the site's nomination states.

Leroy Bookman III was a member of Anderson's class of 1964 and former varsity football team player at the school who recalled an often-raucous and exciting atmosphere when playing in or spectating games at the Yellow Jacket field. Bookman said the stadium provided East Austin residents with a large public gathering place near Rosewood Park that became "the center of a lot of the social activities for the community" and regularly drew large crowds of all ages.

“It was always good entertainment for those games ... and that’s why the businesses used to close around there, because the business people wanted to see the games, too, and wanted to be part of the show. Everybody used to turn out for the games," Bookman said.

Most original aspects of the site are no longer standing, in part given Austin ISD's original use of "cheaper building materials of less permanence" compared to facilities at other city schools, according to information compiled by Dobrasko and Smith. Years of "neglect and disinvestment" and "attempts to erase it" by AISD after Anderson's 1971 closure and related busing of former students across town eventually saw the stadium paved over for a parking lot, before a community-led push resulted in its partial restoration in the 1990s. It sits next to what is now AISD's Eastside Early College High School campus.

While some aspects of the stadium's history are lost, Bookman credited the facility as a community hub and spotlight for "some of the best" athletes and musicians to come out of Austin during Anderson High's years in operation.

“Every kid growing up wanted to be an Anderson Yellow Jacket and wanted to play at that stadium because of the crowds. It was a very exciting time," he said. 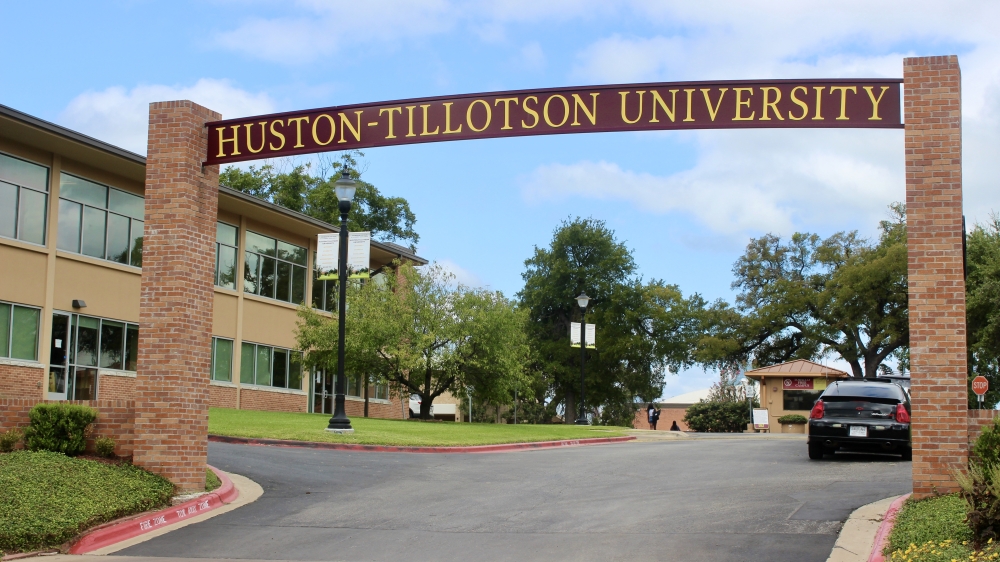 The campus of Austin's lone historically Black college or university, or HBCU, is home to a range of components contributing to the Huston-Tillotson College Historic District's historical relevance. A dozen buildings, campus quadrangle and landmark bell tower located on a property are presented in its nomination as significant in relation to education, architecture and the Black community in Austin.

Huston-Tillotson now stands as the oldest higher education institution in the city. The school was highlighted as "a nexus of African American higher education" for well over a century in its nomination, prepared by Cara Bertron, a senior planner with the Austin Housing and Planning Department and city historic preservation officer.

"[Huston-Tillotson] has provided essential opportunities for African American students for nearly 150 years, changing along with shifting approaches to Black higher education. Starting in Reconstruction and continuing through the tremendous changes of civil rights and integration, [Huston-Tillotson] has been and continues to be an important community resource," Bertron said in an email.

Its history stretches back to the establishment of Tillotson Institute followed by Samuel Huston College in the 1870s for the education of formerly enslaved people. Decades later, the merger of the two schools in 1952 "sparked an ambitious building program" that resulted in the construction of several buildings included in its National Register submission, according to the nomination packet.

The Huston and Tillotson schools' histories unfolded while segregation was the norm throughout Texas. With the 1952 merger and the Supreme Court's 1954 ruling against such discriminatory policies, the newly formed Huston-Tillotson College experienced enrollment and financial troubles as some students sought education elsewhere. The period running from the merger through the 1970s also represented the peak of the building program that produced several of the college's most notable structures with an aim to eventually support a growing student body and display a new style, according to Bertron's materials.

"Designed by a prominent local architecture firm, those new buildings transformed the campus into a clean-lined, modern place suited to a forward-looking institution. It still has that cohesive feeling," Bertron said.

The results of that building effort surround some of the campus's oldest landmarks such as the Evans Industrial Hall built in 1911 and Administration Building built in 1914. Mid-1900s additions include residence halls and academic facilities as well as a new student union, courtyard and the prominent King-Seabrook Chapel and Bell Tower.

The city partnered with Huston-Tillotson on its nomination as a result of the preservation-focused Underrepresented Community Grant that Austin received in 2017, with backing from the university's "extraordinarily supportive" President Pierce Burnette, Bertron said. The city is planning another National Register submission through its grant-supported work this year for East Austin's Parque Zaragoza as a site significant to the local Mexican American community. 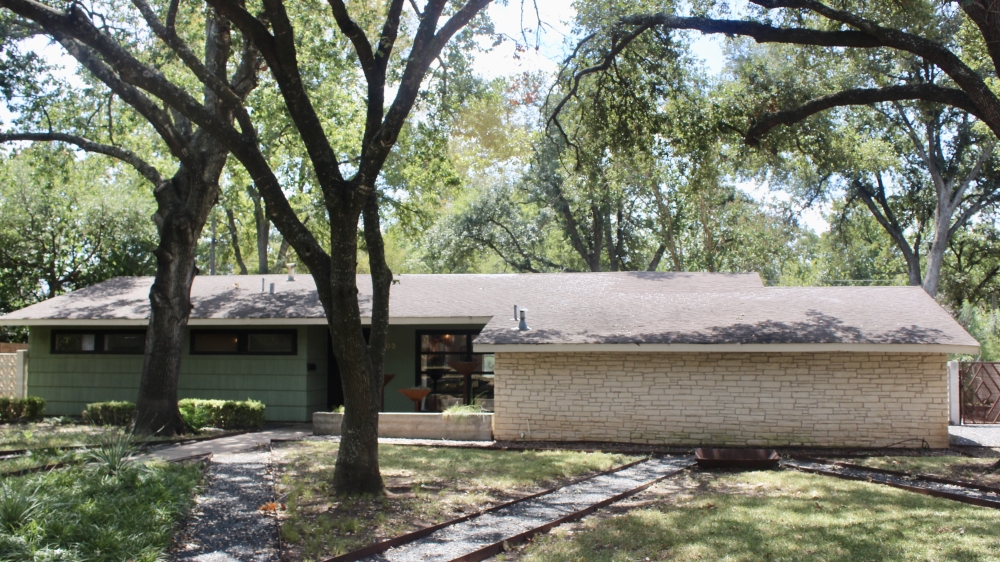 The village was launched in the early 1950s from a joint vision between a collection of local builders and national air conditioning companies that became a real-world test site for the efficiency of air conditioning. The subdivision is deemed significant both for its place in the history of home building and engineering as well as its surviving examples of mid-century architectural style, according to the site's nomination prepared by Elizabeth Brummett with the city's historic preservation office and members of the architectural advocacy group Mid Tex Mod.

“They were innovative in the sense of the air conditioning systems, but they were explicitly trying to cover the range of designs and styles that were being built at the time. So it really does highlight both the current trends in residential construction in Austin and in Texas, but also where that could go," said Jason John Paul Haskins, a Mid Tex Mod board member.

A total of 22 test homes ranging from 1,145 to 1,468 square feet were originally built for the village concept, most of which are still standing and many of which have since been modified. The launch of the village in 1954 drew tens of thousands of visitors to Austin and saw most houses sold within a matter of months. The district represents another example of Austin's racist policy history, as homes were limited to purchase and residence by whites only due to "restrictive housing laws, regulations and common practices," according to its nomination.

The nomination materials note that the village was not the first suburban, residential air conditioning experiment in the U.S. However, it was the first marketed explicitly to the middle class and was designed to win over homebuyers and builders to the concept of new air conditioning technologies.

“One of the things that really stood out to me that was kind of surprising was that people had to be convinced that air conditioning was a good idea. It wasn’t taken for granted. ... One of the [contemporary] quotes was that the sound of it starting up wasn’t worth having the cool air," Haskins said.

Kevin Smith, who lives in the historic district, also noted the extent to which the village builders tinkered with home design and the "unique" touches that remain in his house today.

"They not only experimented with what air conditioning does, but my understanding is they also worked with experimenting with having house fans and exhaust fans, and where to put the dryer exhaust," Smith said. "It was a little bit more comprehensive than just air conditioning, but some of the other things that we take for granted today were also kind of teed up in the Air-Conditioned Village.”